Climate Change: Let’s Vote On It 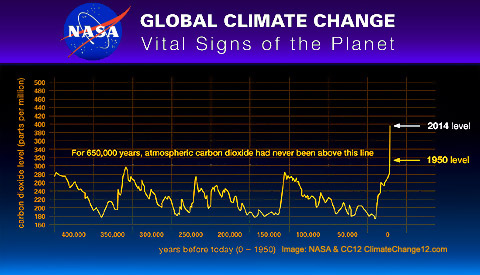 Over 97% of the scientific community believes that the Earth is warming because of human activity. Yet, so many people outside of this community will not admit that their actions are having a negative impact on the world. There are people with tremendous power denying an entire academic community. They attack their work and the scientific method in the process. People in power have an influential and loud voice, and our country reverses the scientific progress it has made when our leaders dismiss the research and don’t take action.

2018 was the hottest year ever recorded. Since 18880, the average temperature of the planet increased by 1.9 degrees Fahrenheit. In the last century, sea levels have risen eight inches and continue to rise at an accelerated rate. Natural disasters around the world are steadily increasing. Resources are being depleted and droughts are becoming more common. Over 600 million people live near or on the coast. Major cities like Miami, San Francisco, New York, Venice, and Dubai and their densely populated communities will face the effects of the rising sea levels forcing millions to become refugees.

Ms. Pikkarainen, the AP Environmental Science teacher at SRHS, describes climate change as, “the idea that the temperatures on the planet are changing, more specifically getting warmer.” She added that there are numerous negative economic and human impacts of the warming of the Earth. “Farms are losing money and cities are being flooded so they have to pay for the cost of restoration. People are having to move from where they normally live.”

California has taken a beating with the increase of natural disasters – multiple forest fires over the summer and increased rainfall in the fall and winter result in deadly mudslides and floods. These natural disasters take lives and cost billions of dollars.

It is not a coincidence that all of these events are happening simultaneously. They are caused by an increase of carbon dioxide in the atmosphere. Looking at the graph, the amount of CO₂ has exponentially increased in the last seventy years. Earlier in the graph, there are cycles of increasing and decreasing levels of CO₂. However, the current amount is at an unprecedented level. With the Industrial Revolution, humans became more efficient in multiple fields, including CO₂ emissions. Humans started working faster and emitting more greenhouse gases.

The increase of carbon dioxide emissions contributes to the greenhouse effect. The greenhouse effect is a necessary part of how humans can survive on this planet. Without it, the planet would be too cold to inhabit. However when an increased amount of CO₂ and other greenhouses gases like methane are produced, they enhance the greenhouse effect and we are starting to see the impact of previous and our own generations actions. The sunlight radiation is now being absorbed by the anthropogenically added particles in the atmosphere making the temperature of the Earth increase unnaturally. Even a small increase, less than two degrees Fahrenheit, can lead to dramatic and deadly reactions.

The Eco-Action Club at SRHS organizes events that reward students for carpooling or riding their bike to school. They have also attended multiple Climate Change rallies in San Francisco this school year to persuade state and national representatives to take action. The club, in partnership with Terra Linda High School, have successfully advocated for sustainable purchasing at the SRCS district level. Additionally, they plan to implement days at SRHS next year to educate students on waste management. While they promote the change of lifestyles to help the environment, the Eco-Action club believes, “the thing that is going to make the most actual change is political.”

Voting, talking to representatives, and being informed on the issues will result in more change than altering your individual lifestyle and hoping the rest of the population will do the same. In the past few years, there has been a shift from an optimistic approach to the problem to a more anger fueled one. Activists, environmentalists, and the younger generation have given up on waiting for other people to join them in their fight against climate change. They are angry and demanding change from the people in power. They are conveying the severity of this issue. It can no longer be ignored and is vital to the survival of the human race.

Mr. Temple, the Academy of Physics and Technology (APT) and Media Academy teacher, uses the problem of climate change as “an opportunity to solve a set of interesting problems.” He teaches his students about the issue with a unique spin: exciting them about the possible solutions they can invent and engineer. While he is successfully inspiring his students to create change, he is frustrated as an educator. There has been a “failing of educators and society” because the general public “does not understand how the scientific community comes to a consensus.”

For a scientist to be published in a scientific journal, they must conduct years of research, experiments, and peer review before their discoveries can be published. Mr. Temple and other scientists are frustrated by people who disregard these findings after years of work and fact checking. They have proven their findings to be true and know that if they are proven incorrect, their reputation will be ruined. Unfortunately, the scientific community does not have as big of a platform as the ones discrediting them. Similar to the Eco-Action club, Mr. Temple believes the “most powerful thing you can do to make a difference in climate change is vote.”

Jimmy McNair, a SRHS junior believes in climate change “to an extent.” He blames politicians for polarizing and exaggerating the issue of climate change. When talking about climate change rallies, he commented, “I don’t know why politics come into it.” Students from the Eco-Action Club also addressed this issue, “You’re a Democrat if you believe in climate change,” Sophia Stewart commented about how people feel categorized based on this single issue. Climate change has become bipartisan as McNair and Stewart stated, but this does not change the fact that we need to act now and we need to do a better job educating ourselves on the facts.

“You shouldn’t be dramatically changing your life in several ways,” McNair answered when asked about people changing their lifestyles to decrease the effects of climate change. Unfortunately, this way of thinking will lead to further destruction of the planet, making it irreversible if we don’t make drastic changes. There are too many people in the United States and around the world who won’t change their lifestyle and behavior without mandates from the government. It is necessary for the government to take action. We must use our power to vote for politicians who will take action.