Off the Leash • June 14, 2019 • https://srhsoffleash.org/1151/investigations/students-need-sleep-could-school-make-that-easier/ 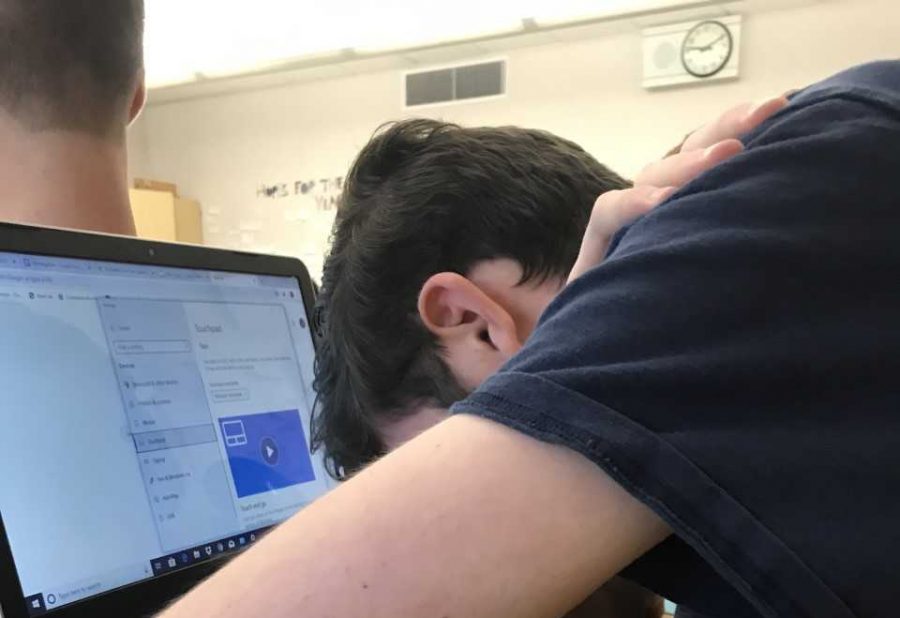 School at 8 a.m. Work at 4 p.m. Home by 8 p.m. Sleep by 1 a.m. This is the routine Ronald “D’angelo” Jimenez, a San Rafael High School senior, has followed for nearly six months after joining the In-N-Out crew at Novato, California. From starting off as a busboy in his first month to now on the verge of making fries, D’angelo has made rapid progress when you compare the amount of time he’s been working with the company. However, getting home late after a productive 3 – 4 hours of work and having to do homework he has been assigned is not ideal. “I’m exhausted by the time I get home. I just don’t have the energy to do my homework,” D’angelo explained.

However, after January 14th, this issue became worse. It was a day of celebration for D’angelo. He became 18. An official adult, but he had some privileges stripped away.

It’s May 14, nearly 4 months after D’angelo’s 18th birthday. During an interview, I questioned if he had work scheduled later that same day. He did but added “I don’t get off until 11:30 p.m. now because I’m 18, so they are allowed to work me however long they want.” Before a student turns 18, they are issued a work permit from the high school. It limits the amount of hours they can work. But once they turn 18, there is no limit to how many hours they can be scheduled to work.

With longer hours comes less time to do homework and even less time to allow you and your body to rest. He openly admitted that, “I usually don’t go to sleep until 1 or 2 o’clock in the morning because [he] usually has to do homework when [he] comes back or [he] just plays video games instead.”

Mark Schillinger, a sleep therapist at Schillinger Chiropractic & Wellness Center, explained the danger of this routine that many teenagers besides D’angelo have. “Teenagers who stay up all night constantly suffer from a lack of serotonin which is a chemical in the body that causes happiness. Their brains are working abnormal hours and this leads to even worse sleep.”

And this is the story for many SR students who have to attend school at 8 a.m.

A small, online, anonymous survey was done of 68 random high school students. Most of these students were from SRHS. It asked about the students’ sleep cycle and whether they would change the school start time.

On average most students answered that they usually slept from around 11 p.m. and woke up around 7 a.m. In addition, most students would move the start time to between 9 or 10 am.

Schillinger offered an explanation to why this is. “In teens, the secretion of the sleep hormone melatonin begins at about 10:45 p.m and continues until around 8 am.”

Only a few students were against and concerned about this change. They were worried about school finishing later, after school activities being pushed back and less time for them to do things they want.

There are some students who feel that being too stressed out and given too much homework causes them to stay up later. An anonymous sophomore from the survey wrote, “They are giving [us] lots of work and not helping with most of it and if you have an after school activity like a sport you need to still do the work to get a good grade but it’s (hard) when you gotta stay up later and get up early.”

Another anonymous sophomore proposed when school should start and when it should end, “9:00 (a.m.), we get out at 3:20 (p.m.) making the classes shorter.”

Aron Rivas, senior at SRHS who lives in Richmond, has to leave home by 7 a.m. if he wants to be on time to class. He tells me, “I have to wake up around 6:30 a.m. and sometimes it gets really exhausting having to do it all week.”

Fiona H. Barwick, a psychologist and sleep specialist at Stanford Sleep Medicine Center, explained that “a person’s sleep cycle is 50% genetic and the other 50% is environmental.”

Everyone has their own sleep and wake cycle. Your sleep cycle doesn’t stay the same all through your life. Dr. Barwick said, “There is a biological shift of one’s sleep cycle between the ages of 12 and early 20’s.”

Not everyone may experience this in the average range. It also doesn’t happen all in one day but rather over time. Your sleep cycle does return back to normal but depends how much of a night owl you are. Night owls are the first to understand this problem because they are the ones being affected by the school schedule. These people may look sleepy in the morning but end up being full of energy by the end of the day.

Night owls could be produced due to environmental aspects, such as work at night.

Dr. Barwick also added, “losing sleep may come from using phones or looking at a screen during the night.” Your body reacts to the amount of light being exposed to you. This would change your sleep time by pushing it  back for about an hour.

Jennifer Normoyle, SRHS therapist, mentions that students could be going to sleep earlier if they could balance their screen time during the night.

Gina Muller, SRHS nurse, stated: “Teenagers need about eight to nine hours of sleep.” If teenagers are pushing back their bedtime, then they aren’t getting the recommended amount of sleep.

Interrupting your sleep can have major consequences. This lack of sleep can cause students to be mentally unhealthy, experience physical health problems and not perform as well in school.

Moreover, it shows that it isn’t the most effective for teenage students to start school at 8 a.m., with their sleep cycle. Dr. Barwick stated, “Depriving sleep at a young age, (when) bodies and brains are still developing, won’t help.”

Mr. Winston, SRHS social studies teacher, also sees this in his kids. Mr. Winton’s son is in elementary school, which starts at 8:45 a.m. SRHS bell schedule starts at 8:00 a.m. He believes that the start times should be flipped– that elementary school should start earlier than high school.

Studies from the NCBI show that forcing teenage students to wake up before 7 a.m. to attend school at 8 a.m. plays havoc on their bodies intended sleep cycle.

This intended sleep cycle is called the circadian rhythm. The National Sleep Foundation explained the circadian rhythm as “a 24-hour internal clock that is running in the background of your brain and cycles between sleepiness and alertness at regular intervals.” When it’s dark, your eyes send a signal to your brain to release melatonin, which makes your body tired. When there’s light, certain receptors in your eyes tell your brain it’s daytime.

A resource from the Division of Sleep Medicine at Harvard Medical School, written and reviewed on December 18, 2007, reads, “…many high school(ers) go to bed relatively late at night because their internal clock prevents them from feeling sleepy until later.” In addition, the paper says, “However, school start times are usually much earlier than the typical adolescents naturally preferred wake time.”

Since then it has also been found that due to the biology of human development, sleep mechanisms in teens do not allow the brain to naturally awaken before 8 a.m. This is why many or most students rely on an alarm clock to wake them up in the morning because our ancestors didn’t wake up at such times to get ready for school.

In the United States, the average high school start time is 8 a.m. (the same as SRHS). According to a study done by the University of Arizona, students (on average) take 56 minutes to prepare for school once they’ve woken up, meaning that teenagers usually have to wake up at 7 a.m. or earlier just to get ready for school.

American children have also been accounted to top the rankings for being the most sleep deprived in the world and it is majorly tied with school start times being to early (8 am).

To combat this, states all around the country and even some countries around the world are experimenting with moving to a later school start time.

In an article published on Aug. 14, 2018, Jennifer Chambers of The Detroit News titled “Some Mich. schools delay start times to help teens sleep, learn;” she documents the process on how the One Metro Detroit school district was able to get the Board of Education to approve changing their high school start time from 7:40 a.m. to 8:20 a.m.

“When compared to last year, there were 60 percent fewer tardies in [the] first hour and a 30 percent reduction in the number of absences.”

This statistic is important to the SRHS community.

Glenn Dennis, principal of San Rafael High School, said, “First- and fourth-period tardies are crazy. It’s off the charts.” He shared a digital copy of the attendance log for one day. On April 24, 2019, a representative A Day, 9% of students were tardy.

However, besides the improvement in Michigan’s attendance, students reported having better sleep and “being less tired in the afternoon”.

In the United Kingdom, school districts have also tried to see results by moving their school start time forward.

Funded by a London charity, hundreds of schools in the UK moved school days an hour. Students would now arrive at school at 10 instead of 8:30 or 9 am. Early data has shown that students are learning more, and are becoming happier. Most importantly, the rising rate of mental illness associated with sleep deprivation are starting to decline.

However, there will always be a push back when discussing a change so drastic.

Mr. Chretien, an SRHS math teacher, has seen some research about sleep deprivation but “there isn’t sufficient research to prove this is a major problem.” According to Fiona H. Barwick, there aren’t many places that do research on this topic. It’s a young field.

Mr. Dennis also showed a vast amount of hesitation in changing San Rafael’s start time. “Well, think about working parents. Think about the students who take the bus, and think about students who are in after-school sports.”

In addition, the San Rafael City high school district is vastly different to Michigan’s One Metro Detroit school district. We are different economically, culturally, and it would be extremely difficult to just copy and paste.

Early results have shown success but for many districts including SR’s the data collected is still believed to be in a fluctuating state. The benefits are known, but to flip the system on its head and change how a district is fundamentally ran is for many districts, too big of a gamble to take.