Off the Leash • November 26, 2019 • https://srhsoffleash.org/1244/news/mass-shootings-causes-an-increase-in-school-security/

Mass Shootings Nationwide Cause An Increase in School Security 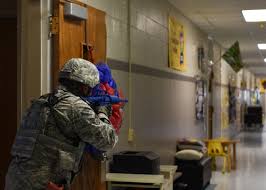 At San Rafael High School, similarly to many other schools, there are scheduled drills for certain situations that could occur, such as a lockdown drill, fire drill or an earthquake drill.

For the fire and earthquake drill there is a similar protocol, however for a lockdown drill some students feel like what they are told to do won’t be what could help them most if they were in a real situation. Lockdowns are for anything from a stranger on campus to a firearm on campus.

Do students and staff believe the drills leave us ready, should there be an actual shooting?

School safety is a priority at all schools, especially now that mass shootings, some of which occur at schools, have become commonplace in American life. Bill Welch, who serves as the San Rafael City School district’s coordinator for emergency preparation training, notes that the district has funded his position for the past three years, which suggests they’ve made school safety a priority. According to a 2018 article in the Washington Post, school security has grown nationally to a 2.7 billion dollar market, not counting the billions spent on school police officers.

Over the past decade, there have been 180 shootings at K-12 schools in the United States, proof of school disasters and emergencies have been rising pretty steadily since 2009. The number of people, including children, who have been killed in mass shootings is exponentially more in the past 20 years since Columbine. An article from The Trace written in August 2019 states that the rates of death from firearms among ages 14 to 17 have grown to be 22.5% higher than motor vehicle-related death rates.

Miguel Rodriguez, a senior at SRHS, thinks that there are students who in fact take the safety drills seriously, but he mentions that there are many who “take it all as a joke and think nothing of it.” He also thinks that teachers aren’t doing much to prevent kids from taking the drills as jokes.

Miguel believes the security does know how to handle the possible events that could take place at the high school.

“Nah,” said Anderson Reyes, a sophomore, when asked if he felt at all endangered on campus. While Anderson feels generally comfortable with our two security guards, he believes that the drills the school performs expect “every student to be calm, and [in the case of a real situation] it will most likely not be that way.”

When asked if there was room for improvement on the drills, Anderson said that they should be made to seem more real in order to change the view of students who view them as “a joke or a way to get out of a test or quiz.”

Ben Johnson, one of two members of our school security, who has been here 19 years and who has been through multiple real lockdowns feels confident in the school’s ability to ensure students are ready and prepared.

The first lockdown Ben was involved in was due to a robbery at Redwood Credit Union, across the street from the front of the school. SRHS was told that the assailant was headed in the school’s direction  and the school was completely locked down in 10 to 12 minutes. The suspect went east up the hill on embarcadero behind the school and was not found, but many police and even a helicopter was dispatched.

Another lockdown he was involved in was a result of a burglary on Park street, behind SRHS.  There were three suspects described as armed and dangerous by the police department. Helicopters were dispatched and the school was locked down soon after they were notified of the burglary. The suspects were found and apprehended by Dominican University and after almost an hour the school was called and told that they could go off lockdown.

Over the 2019 Veteran’s Day weekend, there was a school shooting threat posted online that targeted multiple SRHS staff members. Videos were posted to YouTube and Instagram with threatening titles and oddly cryptic coding, along with pictures of staff and students   Online notices were sent out to families by the school saying that there would be increased security patrolling campus the next day. That same night just a few hours later, another notice was sent out saying the suspect had been caught.

Soon after the videos and pages were created, there was a mass hysteria affect on many students. Everyone started texting and contacting each other trying to figure out who would do this and why. Group chats were filled with suggestions to what the codes meant in the posts and thoughts about whether students were going to school the next day. Some parents were still concerned about their children’s safety and allowed them to stay home, even though the suspect had been caught the previous night.

As the school practices emergencies and disasters with drills, they have hit the mark on several tests for effectiveness of these drills.

“We are always trying to improve on our response time and our efficiency,” Ben noted about the preparation of security.

The drills ensure enough safety but many students can “easily take everything as a false alarm,” so staff need to impress upon the students the fact that these drills are serious. Those who don’t take the drills serious may talk to their friends or goof off and play hand games like chopsticks.

As the school has only two security guards, both of whom are allowed lunches at separate times, campus is left with one security guard everyday at two different times. Whether Ben is the only security guard on campus or not, he reports that he uses his senses and tries to anticipate possible emergencies before they happen, “I’m always proactive…. You gotta see it coming.”

Dr. Heredia, one of the school’s assistant principals and the school’s head of disaster and emergency planning, agrees that students should take these drills as dress rehearsals for the real situations. She gave an example of students being in a mall with an active shooter. Now, if they are students who take the drills seriously, they might have an idea of what to do in that situation.

During these drills, teachers and students evacuate classes and make way toward to the football field. Teachers organize their classes into straight lines on the field and hold up either a green or a red card. The green lets the security know that teacher has all their students, but if a teacher holds up a red card it means they have a student or students missing. If anyone is missing, security makes it a priority to find each student absent from their class.

Dr. Heredia noted that it is always a challenge to find time for more in depth training for the school’s certificated and classified staff. The school also needs money to go along with that extra money.

“Time is such a precious little resource that we don’t have enough of,” she said.

Officer Piombo said that state law requires a new, updated disaster plan with improvements and revisions. The school and police department work together to do what they can to adjust.

State laws have mandated more frequent drills at schools. Some schools have taken extra steps to make their drills more realistic, however doing so risks great distress for those involved. Officer Piombo noted that at one school, where blanks were fired to simulate actual gun shots, several students were traumatized.

Would SRHS students and staff want our drills to be more realistic if doing so risks traumatizing even one of us? Are there limits to how prepared we can ever be for the terror of an actual shooter on campus?