Everyone Likes Nutella, Even the Rats of San Rafael 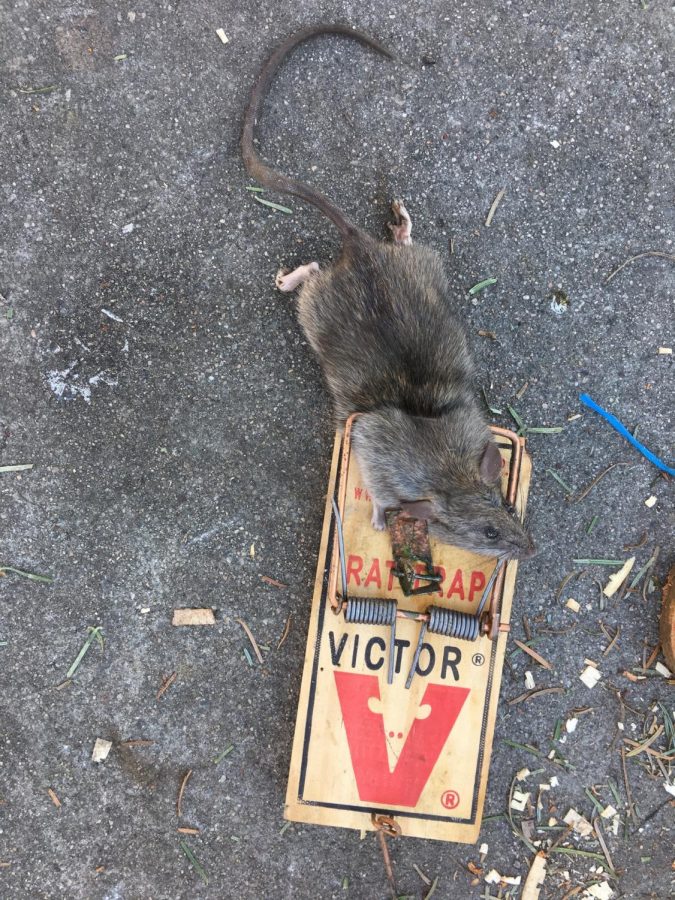 As demolition began on what used to be the Physics Academy building, towers came tumbling down in clouds of dust, and rats scurried in every direction. San Rafael High School has experienced tragedies from flooding to lockdowns, but what comes to mind for many students and faculty is the sight of rodents. Every faculty member and student has their own story to tell.

Although there has been no serious harm caused by this vermin infestation, their residency poses serious health and illness threats.

After surveying freshman in a seventh period English class, it is clear that more than half of the freshman asked believe that the rodent issue at SRHS is partially due to the fact that the campus itself is not completely sanitary.

It is essential to get the perspectives of incoming students about a campus that they will attend for the next four years. They believe that the excessive littering has and will continue to negatively impact the campus.

Freshman Piper Pomeroy told of a time during her gym class when she and her friends were sent to the girls locker room. To their terror, when they opened their gym locker, a rat jumped out at them. One of her peers had left unsealed food within their shared locker, and they were faced with the horror of a scrambling creature. To their knowledge, that rat still remains within the walls of the girls locker room to this day.

Principal Dennis did not directly address details about dealing with the potential infestation. Instead he scrolled through his camera roll and showed photographic evidence of a time when Mrs. Rodriguez, Jeremie, Jose De La Rosa, and he discovered and caught a rat scurrying across Mrs. Rodriguez’s desk. He recalls De La Rosa and Jeremie rushing to lure and catch the creature with lacrosse sticks as Rodriguez ran for the hills.

When asking students if they personally had ever encountered a rat, all first-year student interviewees stated that the gym area of the school is where most rat activity can be found. Trey Skieresz recalls a time when his physical education was stalled due to a disturbance caused by a rat who scurried across the floor during the stretches, putting the class into a frenzy. Cheerleader Yoselin Calderon testified that within the dance room, where our school’s national champions practice, you can hear the scratching of rodents as they run along the floorboards, putting a stop to their practice.

It is clear that the student body is becoming increasingly aware of the rodent problem at San Rafael High, but this has been an ongoing issue.

Head Custodian Oscar Caballero kills 4-5 mice daily. He stated that, from his observations, the student body does the bare minimum to help in maintaining the school clean.

“During brunch and lunch kids throw their trash on the ground, and I am the one who spends a lot of time cleaning after them,” explained Mr. Caballero during an interview.

He shared that over the years the vermin issue at SRHS has only gotten worse. He regularly finds bite marks on the bottoms of trash bags and his Nutella-filled mouse traps are no longer taking hits. Like the rest of the student body, he agrees that the reason the gym area of the campus is a popular attraction for rodents is due to the sticky environment and system of pipes.

Ms. Healy, a P.E. and Health Teacher and sports coach, has worked for our school since 2002. When asked about the schools level of cleanliness, she stated, “Some parts of the school are cleaner than others. The gym complex is a big, old building where people bring and leave food. It can be an attraction for rodents.” This further supports the theory that the gym’s moist and sticky environment is a gold mine for our rodent residents.

Although our custodians take precautions to minimize the invasion of our pesky friends, one of the pressing reasons why we get bombarded with waves of rats is due to the rainy season. They are “flushed” from their homes to seek comfort, dryness, and food, which can all be provided within the gym. This is why and where the “no food inside” rule comes into play. Almost everywhere, food can be found along the ground. It is not only admin’s but the students’ responsibility to aid in the reduction of rodents by ensuring not to leave food or trash out.

Hantavirus Pulmonary Syndrome (HPS) is a fatal disease carried by rodents. The Sin Nombre hantavirus, which can cause HPS, was first discovered in 1993 and since has been known throughout the States. Although we may not be heavily disturbed by our school’s rodents, that does not mean they are safe to have.

The skyrocketing number of the vermin issue within California could foreshadow a national issue.

According to The San Diego Union-Tribune, a report released by Reform California, a political action committee, stated that a survey of 23 rodent control companies across the state showed increases in rat populations everywhere. More than 78 percent of the companies reported an increase of at least 50 percent, and 43.6 percent reported an increase ranging from 76 percent to more than 100 percent. No companies reported decreases.

Citizens of Los Angeles have already begun to have outbreaks of typhus, a disease transmitted to humans via fleas that live on rats. Therefore, the question for our community is, how long until the County of Marin is impacted by the waves of vermin?

At SRHS, Mr. Caballero shared that the district supervisor prohibits the use of mouse traps. He stated that his supervisor told all custodians it was not in their job description to be “exterminators”. However, being a father of two children who have and are attending SRHS, he believes no student should be subjected to potentially serious health and illness threats.

Decreasing pests in our community is an ongoing battle that can never be won due to district policy and geographical location. However, there are steps the SRHS community can take to reduce the exponentially increasing rates of rodents and prevent illnesses such as typhus, HPS, and lymphocytic choriomeningitis virus (LCMV).

Besides the clear conclusion of throwing away trash and not littering, there are environmental factors that can draw animals towards us. To maintain a sterile campus, our cleanliness should go beyond not leaving food out. Piles of leaves, mulch, and tanbark can be potential sites of nests. As well as, opened and exposed trash cans can attract rodents who seek food. Therefore, in order to keep our campus disease-free, our student body, community, and administration must work together to spread the message and practice that cleaning after yourself and others is necessary.

San Rafael High School is home to many. It is clear, both administration and student body seek a change so that they may have a clean and sanitary campus. Therefore, more than ever are efforts of cleanliness important today.