Off the Leash • January 28, 2020 • https://srhsoffleash.org/1350/sports/low-athletic-participation-breeds-complacency-with-losing/ 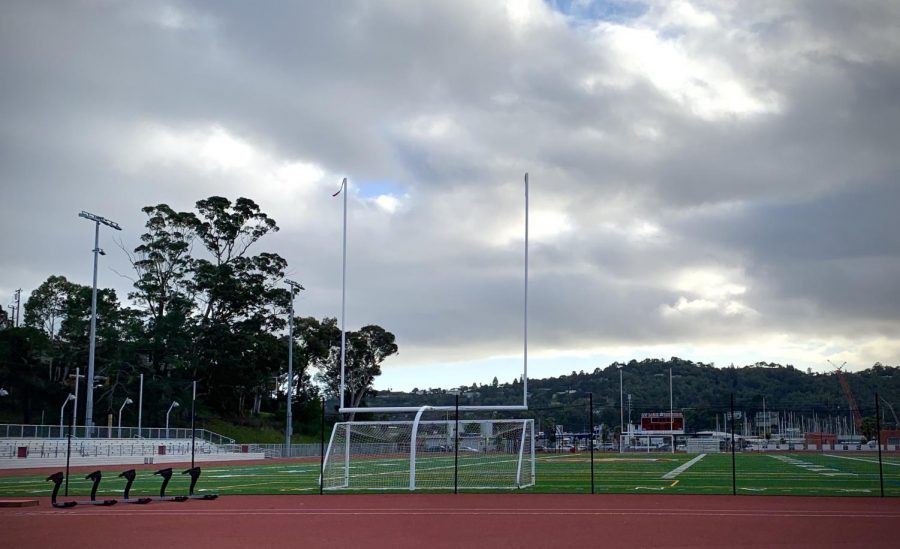 Athletics are one of the most prevalent characteristics of a school, like a front porch is one of the most prevalent features of a house. They are the first impression one gets upon enrolling in or even reading up on a school. This means that word of how good or bad a school’s sports teams often reach the ears of most middle schoolers, whose parents are deciding which school to send their kids to, long before the discussion of test scores and course offerings even come up.

This often gives students premature and often unfair perceptions of the quality of a school before they’ve even stepped foot on campus, and this is the sort of reputation San Rafael has struggled to shake for years.

The typically poor reception of San Rafael’s athletics is one of the main factors that has led to the lackluster participation among students.

For starters, students who want to seriously pursue athletics generally don’t come to San Rafael to do so. This is for a variety of reasons, whether that be students or parents who think they are too good for San Rafael’s programs or students who have been scouted by larger, more prestigious private schools when playing in youth leagues.

Schools like Branson and Marin Catholic are able to dominate in sports like basketball and football respectively because of the resources they have at their disposal, such as larger, more connected coaching staffs and athletic scholarships. This leaves all other schools in the league “fighting for second place” every year, according to Varsity Basketball Coach and SRHS teacher Brett Mitchell.

Having your potential best talent lured to other schools with the promise of scholarships and future recruitment can have effects on not only other schools’ numbers, by dictating where some athletically inclined students want to go, but also can greatly affect student morale.

“When you have good sports programs, it creates school spirit… People can rally behind a team,” said Mitchell, when asked about why schools with better athletics are so attractive to both athletes and regular students.

If students don’t want to go to a school to go play for its teams, then the participation will never increase and athletic programs will stay in a slump, which is what Athletic Director De La Rosa partially attributes the lack of participation in many of San Rafael’s sports to.

“Kids usually don’t go out for a sport if it’s not performing well,” he said. “So a sport that is in a slump usually stays in one for a while.”

Because sports are the main way that a student body gets to represent itself in competitions with other schools, the quality of a school’s teams can greatly sway student morale. Whether you like it or not, kids are much more likely to brag about their football or basketball team’s record, or how many scholarships their school’s athletes were offered last year than boast about how high their school’s SBAC test scores are, so if all students hear from their peers is how poorly their athletics perform, no one will want to participate in athletics or take pride in their school.

Varsity football player, Griffin Rudy, said “it’s okay to not want to play, but by badmouthing our programs, [students] are just adding more negativity to our sports culture and making kids less encouraged to play.”

A culture of negativity will just breed more losing, and athletics will continue to suffer. Among highschoolers, whose main concern is typically their reputation, it is all too common to see students jump ship if a program has fallen into a slump rather than work hard to get past it. No one wants to be associated with the team that went winless for three years, so people stop participating in these sports, and a losing culture is bred, which means that even teams with talented, committed athletes aren’t able to compete with other schools.

San Rafael struggles from low participation in a large number of its programs. Sports like football, boys lacrosse, wrestling, and even the track team are all relatively small in numbers, with the football team only fielding around 25 players last season, boys lacrosse looking to field around 15 this year, and wrestling scrounging up no more than 4 participants. These sports, among others, have typically struggled in league play despite consistently fielding a number of all-league athletes.

Brandon Guerrero, a third-year wrestler and varsity team captain, explained that, because of how wrestling is scored, it is impossible for their team to beat a team with more wrestlers than them. “Even if all 4 of our wrestlers win their matches, we still lose the meet.”

Rudy echoed Guerrero’s frustrations, saying “It really sucks for the good athletes that are committed to their sports to just be seen as a bad team, when the reality is we don’t have enough people contributing even though San Rafael is full of great athletes.”

Varsity Boys Basketball reportedly had only about 13 players come out for tryouts this year, barely filling out the 12 man roster, and while the team doesn’t typically struggle to be a decently strong contender in MCAL’s, the relatively low numbers come off the heels of an underwhelming 2018-19 season that failed to live up to the school’s high expectations.

Low player turnout affects many sports on campus. Only an estimated 450 students play sports at San Rafael out of the over 1300 students that attend the school. This comes out to around a 35% participation rate, while the national average for student participation in high school sports is nearly 56% according to The National Federation of State High Schools Association.

The reality is, these students are given no incentives to try to squeeze athletics into their already busy schedules, and unfortunately one of the best proposals to increase student participation was denied nearly two years ago. The proposition was to incentivize involvement in athletics by having participation in two school sports fulfill PE credits for freshmen and sophomores, which could have had the potential to increase underclassmen participation in sports, which likely would carried on through their transition into upperclassmen. But since then, no word of a similar proposal has been heard, and so participation in San Rafael athletics has mostly stagnated.

The school-social life balance is already a pretty hard one to maintain, and the addition of the large time commitment required by school sports can act as a major deterrent for students, especially when factoring employment into the equation, as many San Rafael students hold down jobs to help out their households financially. With all this considered, it is understandable why sports are not many students’ top priority.

However, high school sports undoubtedly help those who are able to participate in them, and low participation causes students to miss out on the many benefits offered by playing school sports. They help students practice time management skills, give them GPA incentives, and create an overall sense of unity that keeps school communities tightly knit.

There are some students who are incapable of making the time to commit to playing a sport, but those who do have the time and ability are doing a disservice to themselves by not taking advantage of the many unique opportunities their school provides them with.