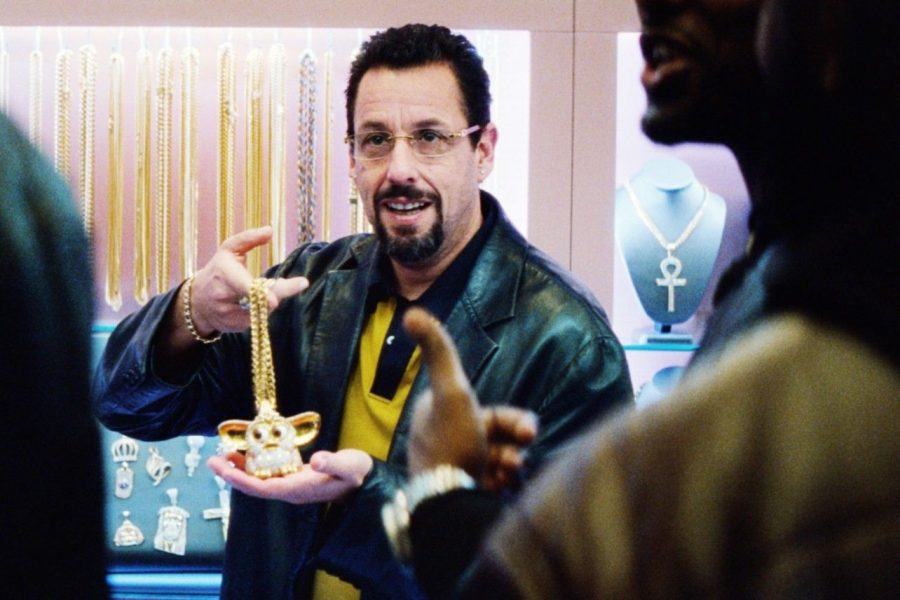 Somewhere in the depths of Adam Sandler’s mind a switch was flipped. Sandler must have realized that he didn’t want to be defined by his embarrassing track record, highlighted by masterpieces like ‘Grown Ups’ and ‘Jack and Jill’. So Sandler went out and got cast in Uncut Gems, and abandoned his usual forte of fart jokes and funny voices to prove why he still belongs in Hollywood.

Uncut Gems is the sixth feature film from Josh and Benny Safdie, two brothers who have spent the last decade and a half releasing independent documentaries and shorts to critical praise. Uncut Gems is their most successful film to date, both critically and commercially, earning nearly $40 million from the box office on a budget of less than $20 million, and boasting a 90% on Metacritic and a 7.8/10 on IMDB at the time of this review.

Uncut Gems sees Adam Sandler play a sleazy jeweler named Howard Ratner, who runs a jewelry store in the center of New York’s diamond district and has a history of being in over his head. The film picks up with Howard $100,000 dollars in debt to his loan shark father-in-law and at the end of his crumbling marriage. Howard’s luck turns however, when he acquires a rare black opal valued at nearly a million dollars and finds a willing buyer: former NBA All-Star Kevin Garnett.

Howard is as unlikable as they come. He’s a cheat, a liar, a coward, and Sandler manages to play the swindling jeweler to perfection, fake teeth and all. He’s cunning in a way Sandler has rarely been before, and brings so much life to Howard simply through his delivery and mannerisms. From his hunched posture to the smug grin that runs across his face throughout the entirety of the movie, Sandler never broke the illusion that he was Howard Ratner, and not once during the 2 hour run time was I ever reminded that I was watching the same guy who played Billy Madison. As a matter of fact, everyone acts their asses off in Uncut Gems. There isn’t a weak link to be found. Even Kevin Garnett steps up big time in a key role. He keeps aura of collectedness around him when he needs to, but is able to quickly switch to seeming as if he’s mere seconds from completely losing it on Sandler.

This film is aggressive. It moves from location to location at a breakneck pace, never giving you a chance to breathe, as you watch Howard take risk after risk, and all you can do is watch Howards towers of lies, bets, and deals slowly crumble down on him. This is all complimented with a script and cinematography that are unrelentingly claustrophobic. Characters shout and yell and argue over one another, while the handheld camera darts from close up to close up, refusing to relieve the tension.

The Safdies have demonstrated an acute knowledge in creating stress through tight direction and cinematography, in both this film and their 2017 film Good Time. It’s just a shame that Howard’s pursuit of a big score is largely meaningless. Howard’s motivation is solely to make money. As a character, he remains stagnant. The only time we see any semblance from Howard is when he’s crying to his mistress, wallowing in self pity, only to dust himself off and keep betting — to keep doing what got him to his lowest low in the first place. He lacks any redeeming qualities because he lacks any self awareness at all. Howard begins the film as an arrogant gambling man and ends it as an arrogant gambling man. No where in the movie does Howard embody the titular Uncut Gem, whose ugly and rigged exterior houses a good heart: Not when he’s pawning off Kevin Garnett’s Championship ring, or when he’s stealing from his father in law to go place another bet, or meeting up with his mistress right after talking basketball with his son.

Howard’s lack of growth left me wondering what the purpose of watching him fumble through life was because in the end, I was given no reason to care about him or any of his relationships, and thus no reason to get invested into the movie.

If I wasn’t supposed to care about Howard and I was just supposed to sit back and watch the arrogant sleaze inch himself closer and closer towards getting what was inevitably coming to him, then all of the Safdie’s attempts to craft any tension were ultimately pointless.

In the end, Uncut Gems is a tight, flashy film, highlighted by grade A performances and unique style, that follows an irredeemable character whose story unfortunately left me feeling empty, questioning what the point of investing over 2 hours into it even was.