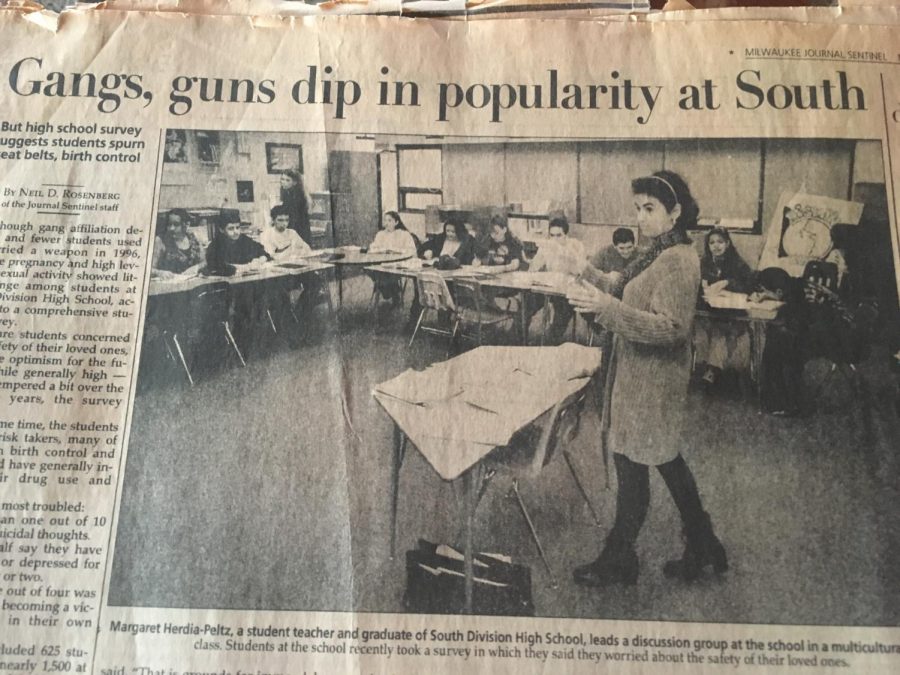 Having served as V.P. to Principal Dennis since 2013, Dennis described his confidante as, “Passionate. Compassionate. Dedicated to equity.” Explaining she is a person who greatly cares about her students and is always thinking about how she can make a positive impact on their lives, drawing advice and life lessons from her own personal experiences.

Spending her childhood divided between Wisconsin and Puerto Rico, Dr. Heredia was a rebellious teenager. As a middle schooler in Milwaukee, she got kicked out of school for fighting. As a result, she was expelled and enrolled into a K-8 bilingual program where she belonged to a classroom full of “brown kids.”

Within the San Rafael district, we house a continuation school, Madrone High School, which is parallel to the San Rafael High School campus. Madrone aims at providing a positive educational experience for students who have faced extreme educational challenges within their primary campus. In most cases, students who have faced adversities within the SRHS campus are transferred to Madrone, where the institution is more equipped to keeping the students on track for graduation and molding them into integrated citizens in an evolving society. Dr. Heredia, having grown up in a similar if not identical environment, has been able to make time to listen and help students who are teetering between the decision of being a part of Madrone or SRHS.

As a Latina vice principal who struggled as an adolescence and who now serves at a school heavily trafficked by people of color, she is able to relate to challenges many of our students face on a daily basis. As well as empathize with the struggles of our lower income students.

During her time in Milwaukee there were approximately 80,000 students and no monitorization of the teacher curriculum. Having a teacher that endlessly broadcasted films and slumped in the back instead of educating them, she took her own and her peers’ education into her own hands. She brought curriculum books home to study and then led, and essentially taught, her class. From there on, she taught English, Spanish, history, and then scouted other students who excelled in topics she did not to teach her and her peers. She found a classmate who enjoyed math to teach math, but unfortunately science was not in the picture. This experience led her peers to embrace her as their “teacher” and further strengthened her love of education and goal of being able to create change for her people. This middle school experience changed her life and gave her a sense of gratification, further solidifying her dream of becoming an educator. She wanted to teach students like herself and rid the system of teachers who did not care about kids like her. From there on she never stopped, she chose to teach in urban communities where she strived to bring honor and respect towards diverse cultures.

Reminiscing on this experience the foster mother of 2 and biological mother 2 stated, “I have a lot of them who are still my friends, and they laugh that I was their teacher.”

Dr. Heredia has been a principal at the elementary, middle school, and high school level. She explained the reason she took a lower title as assistant principal at San Rafael High School: “I wanted to work in a community that had Latinos and diversity.” She added that, “This is the only district in the Bay Area where they have had the diversity of their Latino population be at 68%.”

San Rafael High School is home to 1,294 students, and many more continue to enroll, who are either from or have relatives from Guatemala, Mexico, El Salvador, Honduras, and other countries where the official language is Spanish. Due to the variety of Spanish-speaking and indigenous students, Heredia has been able to assist a more complex demographic. “It’s been more interesting and also more challenging in how to provide support that students need,” stated Dr. Heredia.

Former SRHS student now turned Madrone student who wishes to remain anonymous said, “She gave me three options. I could either be in a schoolyard, graveyard, or prison yard, and from that moment I realized she was right. I needed to get my shit together.”

Standing at 4’11”, Dr. Heredia’s indigenous mother believed giving birth on the island of Puerto Rico was connected to “bad juju” after losing a set of triplets to Puerto Rican doctors. Not being able to trust her island’s medicine, her mother flew at seven and a half months pregnant, disregarding the potential risks for both her twins and herself, from Puerto Rico to Milwaukee, Wisconsin. After giving birth to a set of twins-Maggie and her twin sister-they returned back to the island.

“La gringa,” as her siblings would call her for being born within the States, spent her childhood traveling back and forth between her island, where she learned Spanish, and the state of Wisconsin, where she was educated at a bilingual institution.

Following her dream of becoming an educator, Dr. Heredia stood up for her passion and went against her mother’s concerns that as a female of color she would not be given the respect she deserved as an educator in this country. Simply using a blackboard and chalk, her mother’s old spanish newspapers, asking teachers for old books and extra copies of classwork, Dr. Heredia was able to teach her stepfather and mother how to read, write, and speak English at only seven years old. Later she went on to teach her entire community.

Being a natural born leader presented two pathways for a young and wild Heredia. Like many low income Latinx students at San Rafael High School, Dr. Heredia grew up surrounded by drugs, gangs, poverty, and violent environments. There were even times when she tried to get recruited into gangs. Stereotypically destined to be a Latin pandillera, a gangster, she chose to use her gift of leadership skills and resistance in the classroom to teach.

At San Rafael High School she has served as assistant principal for seven years striving to help students facing diverse challenges. Reminiscing onto her childhood, Dr. Heredia hopes to challenge and assist students who currently live under the circumstances she did in Milwaukee. Advocating social justice, she hopes to help troubled students become aware of the real life consequences of their choices and lead them onto paths where they do not perpetuate the stereotypes of a low income brown student.

Meeting with students who have issues ranging from social emotional to discipline, she creates an environment that meets her students’ needs and struggles. She brings her teams together and meets with families and educators to develop plans that will keep her targeted students on a path to success.