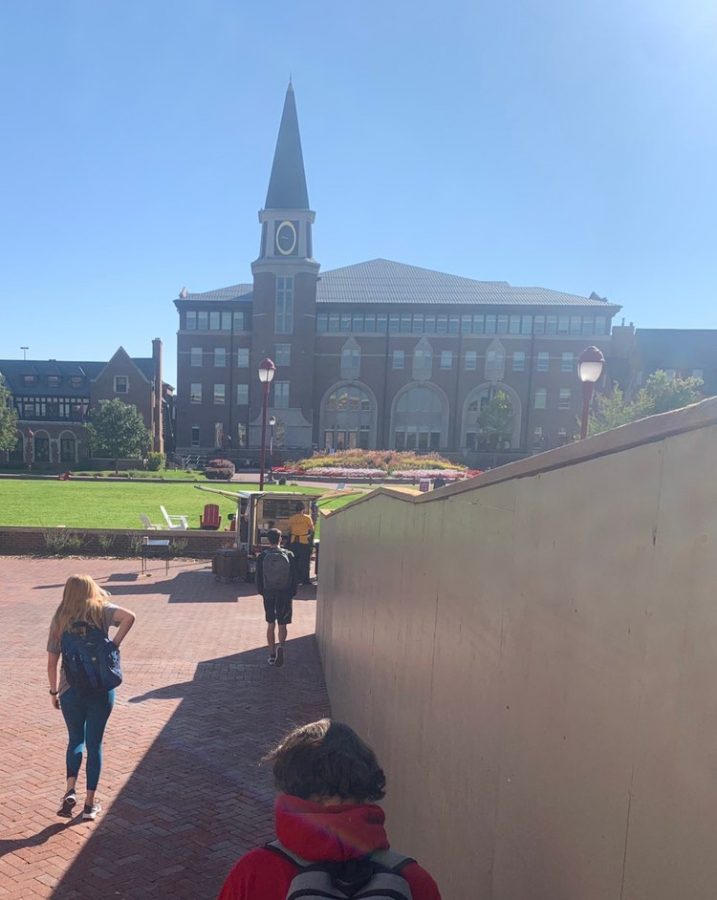 On March 13, 2020, San Rafael High School would experience its last normal day of high school, as the United States was now starting to spike in cases of Covid-19. Soon all schools in Marin began to close as a shelter-in-place was issued March 16 for the next 3 weeks.

During that time, many high school events such as the prom, Spring sports, plays, and graduation to some extent, were all subsequently canceled. Many seniors were looking forward to what could have been the most memorable moments of their high school careers, but sadly it was cut too short.

Even worse were the plans many of them had for Summer, as any hopes of flying somewhere or hanging out with friends was drastically halted. But with the new school year, and the whole new frontier that is college, how are seniors adapting to it?

Although many prior seniors are attending college, this new uncharted territory, most cannot experience it in the traditional sense. “I mean I haven’t really even been on campus yet. I would’ve wanted to do that,” said Katia Quintero, now attending Santa Rosa Junior College.

“I expected to go into my first year of college . . . meeting new people.”

There’s already enough of a challenge when integrating and adjusting to a new school. But, with the handicap of Covid-19 tossed into the mix, it becomes a new environment on top of a new environment. “It’s kind of disappointing, sitting here paying money for college,” said Quintero. “I want to be taught in-person.”

Although most aren’t as familiar with online learning as opposed to learning in a classroom for most of their upbringing, it doesn’t mean it doesn’t come without its perks or silver linings either.

“While you’re in class, you’re really glued to that seat, you’re looking at the professor, you can’t really be doing anything else,” said SRHS alum Luz Diaz, a Cal Poly freshman, “But where if you’re online you can be sending a quick email or working on other stuff while listening to the professor, I feel like it’s more effective and time-efficient in my opinion.”

“I can just wake up 5 minutes before my class and just get ready real quick and then get into the Zoom class,” added Dominik Avila, another alum and Santa Rosa Junior College student.

Nonetheless, some new college students are struggling to adapt to this new schedule of learning.

“I definitely prefer to be in class with the teacher. I don’t like being on the computer this much,” said Oscar Labovich, who attends the University of Texas. “I do my classes here, and then I do my homework here, and then I watch TV here, and then I go to sleep right above. I’m pretty much in the same 10-foot circle for a lot of the time.”

Despite these critiques, many of the students agree that it’s the better of the alternatives. It beats infecting more people with Covid-19.

“Here everything’s open. I can go inside restaurants. They’re not as uptight about it,” said Labovich. “On campus, pretty much everyone is wearing a mask… people are good at social distancing, but the second you get off campus, it’s a lot less so”.  He added that people generalize that Texas is unsafe, and that these beliefs stem from a stereotype of Texas which doesn’t give the state a fair assessment.

Also, out of state colleges aren’t the only ones without criticism. Cal Poly also came a little under fire for its disregard over Covid-19.

“I’ve seen a lot of backlash from students towards the chancellor and president of the school. And I understand people are frustrated that he hadn’t made the decision sooner,” Diaz continued. “It was very, ‘Oh, we’ll see what happens, we still don’t know what’s going to happen for fall, but we hope to return soon.” Although Luz believes action wasn’t taken soon enough, she’s still glad they made the call to cancel for the Winter, and also goes on to sympathize with how much scrutiny the administration was under.

Many schools in Marin were very quick to close early during the start of the pandemic. This also includes local colleges such as College of Marin.

When asked about how COM was dealing with Covid-19, COM Superintendent David Wain Coon responded: “We completed the semester/academic year with remote instruction and limited in-person operations of the College. Initially we made the decision to be remote for fall semester. Shortly after beginning fall we determined it was safest to stay remote with distance education through May 2021.”

Asked about how admissions were affected, David responded saying there was an 8.5% decrease in admissions and that other community colleges experienced a similar decrease possibly due to the pandemic.

But not every student is discouraged, as Charlotte Ruiz attests: “I was originally going to take a gap year and I was gonna go to Oaxaca, Mexico. And I was going to do maybe a 5 or 6 month period there where I’d take Spanish classes and just immersed myself in the culture. But, due to the pandemic, that’s not a possibility.”

Ruiz goes on to talk about how College of Marin takes a lot of consideration into student safety but at the cost of being a little restrictive with that safety. She also admits she might still take a gap year if Covid-19 calms down and she can travel to Mexico.

Many students interviewed contemplated the possibility of taking a gap year but ultimately didn’t go through with it. The reasoning ranges from already knowing what they want to do in college to feeling obligated by their parents to get an education.

Patrick Clark was one of the few students who actually went through in taking a gap year. “What I’m supposed to be doing is go up to Canada to be a ski instructor,” said Clark. “The logistics are still a little not for sure, whether I’m gonna get to go because of Covid and whether they’re gonna let me into the country, but I’m hoping they will.”

Clark explains he hasn’t always felt as motivated as he wants to be for school. He’s hoping this new experience will give him enough time off to think about what he wants to do when he gets to college.

Despite all the challenges these students faced, they’re still managing to make the most out of cards they’ve been dealt. They still have the prospect of getting a college degree, as they take the first step of their journey of a thousand miles.

“I think we’ll be opening up a lot more. I do predict that we’ll start getting more control over this thing or some vaccine will come out or something will happen at least,” said Labovich.  “Something has to happen eventually.”