Off the Leash • September 24, 2020 • https://srhsoffleash.org/1605/sports/parents-and-coaches-prioritize-safety-at-sports-practices/ 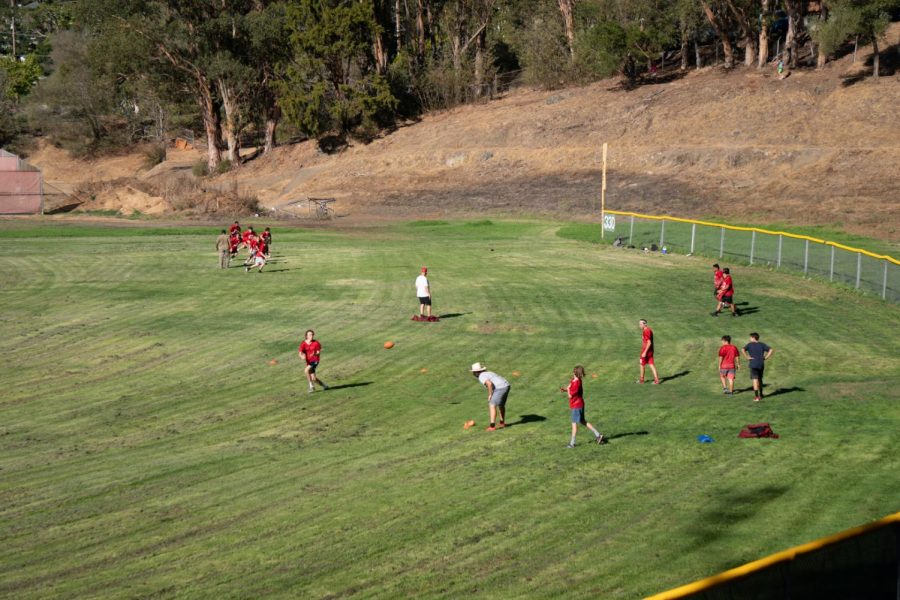 As the school year ramps up, student-athletes at San Rafael High School eagerly return to their beloved sports after nearly a six-month hiatus. Though students want to play, they know it won’t be the same as years prior.

On the sidelines, parents, coaches, and staff are constantly making decisions to ensure the privilege of sports during Covid-19 can remain a reality.

San Rafael High School’s Maria Lubamersky, wife of the SRHS football coach, says, “We hope for the best and prepare for the worst” while talking about her student-athlete son going to football practice in a recent phone interview.

Since the sports season began a month ago, coaches and parents now need to adapt to circumstances that have never been faced before. SRHS Volleyball coach and P.E. teacher CJ Healy says, “It’s a brave new world,” and adds that “it’s important to make adjustments and changes as you go.”

Sports teams are now relying on the coaches to modify how sports are conducted to ensure that a safe environment for everyone can prevail. With almost every sports season being canceled as of  March 2020, athletes, coaches, and even the parents are anxious to get back to what they love. The challenge is in making every effort to not expose anyone involved to Covid-19.

CJ Healy says that “coming to practice is a chance to forget about the reality in [the] world,” but “safety is always [the] number one priority.” Many coaches and parents wonder how many safety precautions are needed to keep people as safe as possible without interfering with the sport. If Coronavirus precautions start to impede the playability of the sport, it may take a toll on the coaches and players involved and reduce the release that their sport has to offer.

Parents also have to make the tough decision of when to remove their kid from practice and gameplay. “If one of his [son’s] teammates tested positive, I would have him quarantined,” says Andrew Shilstone, father of a baseball player at SRHS. Mrs. Lubamersky is also concerned with the health risks down the road as well. Studies done by the CDC say that “young adults with COVID-19, including athletes, can also suffer from myocarditis [inflammation of the heart muscle].” This is a health concern for the parents and coaches as well as it has also been seen developing in middle-aged adults as a direct result of Covid-19.

To minimize the risk of transmission of Covid-19, a combination of recommendations from the CDC and regulations put in place by the county are used to keep the sporting experience as safe as possible. Besides the obligatory mask-wearing handwashing and social distancing, sports teams are also utilizing the “cohort” technique. A cohort, “a group of people banded together or treated as a group,” is used to limit the total number of people a virus could potentially spread to and make contact tracing within the team much easier. In football, for example, the large team is split up into cohorts of fifteen and any interaction between any other groups is kept to a minimum. Mrs. Lubamersky followed up by saying that it is “not to prevent anything, but instead to control it.” This method was put to test recently when one student-athlete tested positive. Everyone else in his cohort was tested and practice was canceled for the following week. The positive case was successfully limited to only one cohort.

Safety measures taken by the athletes’ parents usually limit their ability to attend a game and sometimes completely restrict it depending upon the local Covid-19 protocols. When asked about some of his experiences at games, Mr. Shilstone said, “Sometimes we don’t even get to watch. We just stay in our cars.” Though it is extreme, he followed up by saying that these rules were “totally do-able” and that “we are lucky to be practicing on this field.”

Though the coaches, staff, and parents are responsible for keeping students safe, there is an equal responsibility by the athletes to stay safe while sporting. One of the major concerns by coaches was the potential lack of safety from the athletes. To combat this, coaches have explicit ramifications for behavior that does not follow the Covid-19 safety guidelines in place by the CDC. Coach Healy said that she believes, “Small infractions only require asking a student to be respectful” while students who are “repeatedly violating the rules will be removed from the cohort entirely.”

Some of the coaches also have theories as to where the highest risk of spread occurs in a student-athletes routine. SRHS football coach Mark Lubamersky believes that transmission is most likely when “kids are going home and hanging around with their friends” rather than when they are participating in sports. He believes this because “at San Rafael High School, they are wearing masks until they get on the field” and are “staying in their cohorts of fifteen.”

In a literal sense, the issues that coronavirus presents to the sports community are ever-changing and adapting. A continued effort to stay one step ahead of the virus in order to keep kids on the field or in the gym is going to be vital to a successful season.