Off the Leash • October 22, 2020 • https://srhsoffleash.org/1619/features/coach-zooms-doesnt-want-srhs-wrestling-to-disappear/ 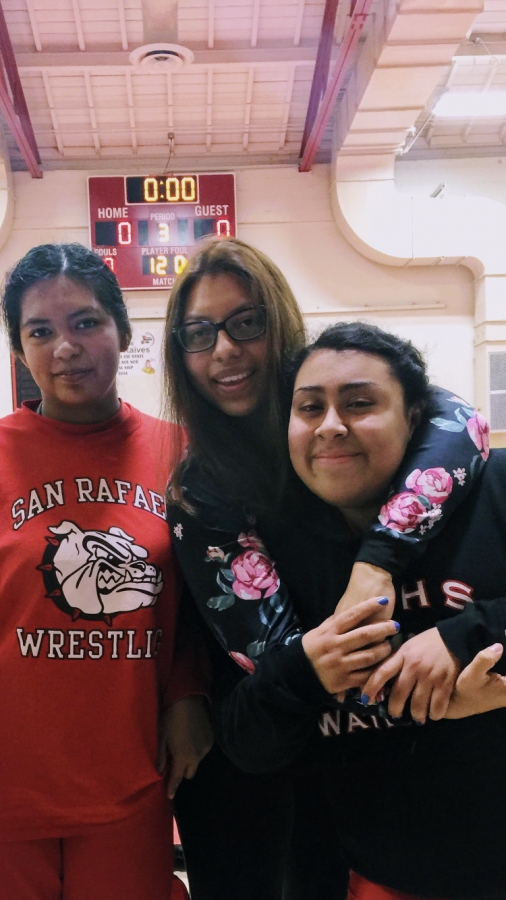 As practice soon starts, there’s often not much to do but sit by and wait for the coach to arrive. Once Coach Zooms comes practice still hasn’t started yet, as there’s still equipment to set up. As she unlocks the Adventure Room, she asks for someone to hold up a flashlight so she can turn on the lights through her makeshift key or paperclip and carefully fiddles with it until a click is heard.

The lights don’t turn on instantly, but slowly light up over the course of a few minutes as space is cleared for the mats from the previous PE class using it that day. Then once the mats are arranged and all taped down, the team then can practice start.

Ziomy Coyoy, or Coach Zooms as she’s called, is no stranger to these types of practices. She has been a wrestling coach at San Rafael since 2011, becoming one the same year she graduated. “It’s really hard to let a program just disappear,” said Zooms when asked why she’s stuck around for so long.

“When my coach disappeared, my quality of life went down.” She continued, “For me, I’ve always identified with wrestlers and the wrestling team… And so because that was my primary identity for so long, it was hard to say goodbye to those people.”

Zooms is the current head coach for Wrestling at San Rafael, after taking over when the previous coaches left back in 2018. During her time spent coaching she’s seen 7 coaches come and go. “There are so few coaches because it’s too expensive to live in Marin,” said Coach Boyd, a former wrestling coach at San Rafael now coaching for San Marin.

“So most people don’t settle in Marin, they find other communities to live in. Most wrestlers… they grow up, go to college, get settled, and that’s when they’re available to coach.” Coach Boyd continued, “Unless you hit that right job or you have a family business, it is really tough to come back and settle in. You have to settle.”

Coach Boyd also discusses the importance of being a teacher, as he found it difficult to be a coach while having to commit to another full-time job. Boyd worked at the University of Pacific in San Francisco after previously retiring in 2004 as a Coast Guard for 24 years. He then began working as a coach for various schools after an old wrestling coach reached out to him. This would lead him to work at San Rafael and meet Coach Zooms.

Despite the challenge of becoming a coach so young, Zooms still persevered. She was still considered a volunteer coach for the first 3 years until she became an assistant coach for girls wrestling. She also was attending Mills College and held several jobs until she became an IHSS provider, a type of caretaker, for her Mom.

However, despite her accomplishments, she still feels as though there is a strong stigma against wrestling. While most sports have funding from the athletic department, most of the equipment for wrestling is self-funded. There’s also the dispute of where wrestling takes place, as practices were once held in Gym 2 but were then moved due to the scheduling issue of basketball practice.

Wrestling has also been on the decline over the past few years, nearly halving in numbers each year. After the 2 previous coaches, Coach Kernan and Coach Casey left in 2018, it’s been up to Zooms to take on the role of head coach.

Although none of these issues are directly specified towards Zooms, she does take some of them personally from the athletic department. She feels as though she’s judged unfairly due to her age, despite her nearly decade long experience with coaching.

But not all look at Zooms with such contempt, as there are many that know her personally and truly see the dedication she’s put into her work. “She will bend over backward to help you out,” said Boyd reminiscing. “Zooms is a very outgoing and very gracious person. Right off the bat, that’s the first thing that jumps out about her.”

He goes on to talk about his rough transition from his full-time job in San Francisco to being a wrestling coach and how Zooms helped him with work he couldn’t always do. “That opened the door and created our initial relationship to where I couldn’t have done it without her. Truthfully the whole coaching experience at San Rafael would not have happened without Zooms.”

“I thought she was a very kind and sweet person,” said Deybi Maldonado, a former wrestler from 2018. “That was one of the reasons I still stuck around for my senior year. Because it was having someone there that I knew was gonna have my back and keep motivating me.” Maldonado went on to say, “She was a motivator, she wasn’t somebody who wanted to see you quit. She wanted to see you progress and be the best you can be.”

“I thought she was pretty cool and nice,” said Alex Zacarias, another former wrestler from 2018.

“She definitely made wrestling more enjoyable because she was a fun person to be around…She was pretty useful when I wrestled her one on one and got some pointers and tips.”

“I thought she was a strict lady, but in reality, she wasn’t,” saaid Berlin Montepeque, a former girls wrestler from 2019. However, Montepeque had a much more personal connection when reminiscing about Coach Zooms.

She was battling serious injuries in her ankles and chest during her last year of wrestling. On top of that, she had been trying to hype herself up to place at NCS as she was just short of qualifying for State her Junior year. According to Montepeque, this bred a lot of negative thoughts, as she tried to push through her injuries and not wanting to disappoint Zooms her last year of wrestling.

After her loss at NCS, Montepeque didn’t want to be seen, as she felt she had let Zooms down.

“The first thing that came out of my mouth was I’m sorry, Zooms, I’m so sorry I didn’t do it.” After profusely apologizing to Zooms after her failed promise, Zooms didn’t feel disappointed at all, but proud. Montepeque continued, “She told me “I didn’t care, win or lose. The reason why I wanted you to keep pushing yourself is so that we could still be together.”

Now approaching her 10th year of coaching, Zooms faces the new challenge of Covid-19. As of now, the current wrestling season has been pushed back to Spring of 2021, according to CIF. Being a very contact heavy sport, it’s unlikely for it to return to its Winter season slot anytime soon.

Coach Boyd shares his disappointment over such a change, and also with the progress at which testing for Covid-19. As he views it as one of the keys to having a much safer season. “If we have that quick testing to where, as coaches, we could test before practice and exclude people, then I think we could be wrestling.”

Boyd also goes on to mention that personal responsibility is the other important half of the conversation. “It comes into making sure the team understands we are a cohesive unit and we’re only as good as our weakest link. And everyone needs to go and be responsible, and make sure that they’re not taking chances and exposing themselves to too many people.”

However, this shouldn’t be too much of an issue for Zooms. She’s always had to face uphill battles similar to this one. Whether it be from the athletic department or the amount of wrestlers she has. It’s simply just another season of wrestling for Zooms, as she continues to come out on top.