Off the Leash • October 22, 2020 • https://srhsoffleash.org/1638/features/srhsd-alum-david-calderon-shares-his-love-forwords/ 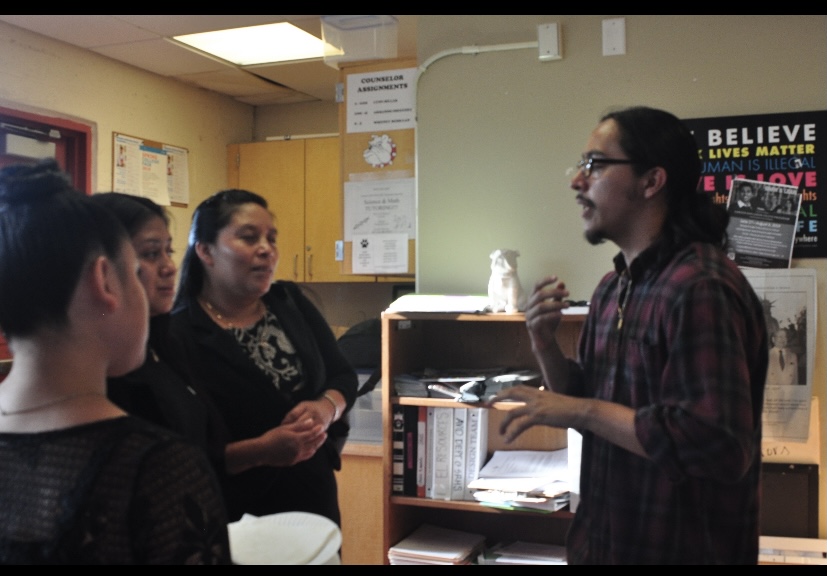 David Calderon packed up everything and got on the plane. After getting his visa, the Yucateco Mayan got ready to set foot into the United States. He was not running away from home, the beautiful capital of Mérida, Yucatán. In fact, he was heading towards the opportunity that he wasn’t able to receive in Mexico.

He wasn’t alone though. His mother came along with him—eager to help him seek the education David craved deeply.

Growing up, Calderon barely had enough money to eat. He would eat rice and beans daily but he describes this meal as delicious. In fact, he still eats rice and beans to remind him of home. Calderon grew up in a household with his abusive, male-supremacist, biological father. When his father abandoned the family, his mother was broke and his grandmother started working in order to aid them. At nine years old, Calderon used his earnings from his first job selling pan (bread) in la calle (the street) to also support his family.

When he turned twelve, his hunger for knowledge became too powerful. He told his mother to get him to the United States so he can finally obtain the education that he wasn’t financially able to receive at home. His mother worked for a whole year and saved enough money for a lawyer to get her son a visa. With a visa in hand, he boarded a plane, crossed the border and finally set foot into the state of California.

He was excited to finally be able to receive an education but that was all over when he got to Davidson Middle School. He experienced discrimination, bullying and got into fights because of the bullying. One day, he got into a fight and was in tears after a call with his mom. Although the bullies made him cry too, he never fought again. Calderon is grateful for his bullies though, because they made him into the person he is today. And his bullies encouraged him to never be like that, and he doesn’t want his students to be like those bullies.

Calderon hung out with older folks for protection. His ‘homies’ as David calls them, are important to him, and he believes that they are very honest people and good men.

Graduating from San Rafael High School (SRHS), Calderon left for San Francisco State and later transferred to Sarah Lawrence, a private university in New York. With tears in his eyes, he described this as “the worst heartbreak ever.” He always dreamed of having the kind of education where his professors could be his colleagues. He applied to many small, private universities because he believed that is where he belonged and would shine. He applied and got accepted. However, he didn’t have a green card so he wasn’t able to receive financial aid. It was heartbreaking for him. All he ever wanted was to become an educator. He felt as if they were taking away his power to do so. He mentioned that he became depressed for a whole month: he did not eat and lost a lot of weight. Finally, his mom was able to pull him out of his misery and told him, “Go to a public school, be a star and when you get a green card, go ahead and transfer if that’s what you want.” And that’s what he did. He went to SF State, created study groups, and shined like a star. When he finally got the chance, he transferred to Sarah Lawerence to receive the education of his dreams and became twice the star. He was able to write and produce a play and received a license to do research. The university was so small he was able to leave his mark.

Ms. Pikkarainen describes Calderon as “a great guy.” Pikkarainen described Calderon as a very focused, and curious student. Pikkarainen proceeded to say that he was a really hard worker. “He went from taking my physical science class to my honors chemistry class.” She saw an amazing potential with David. She mentions that it was amazing watching him navigate school while trying to learn the English language at the same time. She goes on to say, “He is impressive as a person. It is amazing watching him represent his community as a leader now and not as a student.”

He majored in Women, Gender and Sexuality Studies at SF State but concentrated in Social Psychology and Playwriting at Sarah Lawrence. David started his first major because of the abusive, violent biological father he had grown up with. By studying this, he hopes to end male violence and teach young adolescent boys not to be violent.

He was part of the ForWords program when he was a timid high school student. ForWords really liked him because he was really invested and he had a lot to say. He even was an intern for ForWords on Saturdays. Miguel Godoy, the old director of ForWords, asked David to teach a poetry lesson while he attended SF State. That is where he started teaching and he really dug it.

He enjoys being an educator because it connects his past, his present and the future of the generation. Calderon said he will always be an educator. Calderon said one of his favorite parts of working with ForWords is getting to hang out with his co-workers because of the different personalities and energies they have. Calderon also mentions that he loves how his staff pitch in their own ideas. Moreover, his favorite part is getting to hang out with the future generation. He learns about the future from them and he likes being able to be both a student and a teacher.

At only twenty years old, he found his love for teaching while he was teaching lessons to students at Dominican University. Because he has these gifts, he was able to impact many of his students’ lives. Aileen Maldonaldo, one of Calderon’s current students, said, “ He’s helped me with school. He has always been there for me. I can call him at 12:00 AM and he’ll always answer.” A former student, Alondra Ruiz, adds, “I could talk to him about personal issues, and other different topics such as being part of the queer community.”

Calderon has also made an impact in the lives’ of his co-workers and friends. Edwin Martinez, a long time friend, said, “He’s amazing. He is very respectful and professional. He has a great work ethic.” Martinez goes on to say that he’s never met anyone like David: he’s a very caring person and in this day and age, people only care about themselves. Martinez exclaims that his favorite part of working for ForWords is that it is brown-lead and it is not usually what we see in afterschool programs.

Barbara Yupit, one of Calderon’s co-workers, said, “He’s super chill, mellow, easy going, and passionate in everything he does. He is not afraid to try and he is a great leader.” David really puts himself out there.” Yupit goes on to say. Yupit comments that her favorite part of ForWords is being able to talk to students, see them grow and be an extra support for them. David emphasizes that he really likes to connect with his students because connecting with students is the most vulnerable connection one can make with a student. He believes that he shouldn’t separate himself from his students because he is a part of the community they are growing up in.

As I sat in one of his Zoom classes, I noticed he was really passionate about teaching. He was very open to ideas coming from the students or other staff members. He is the type of educator to always put students first. He struck me as witty and silly but also brave and gentle. Although he is a very fun educator, he is also strict, although it is very hard for him to be  He dislikes when his students act immature because they’re in high school. Rather, he wants his students to be better than his old bullies. For example, when students insulted one another in the chat section, Calderon was not very happy and encouraged his students to be nicer.

When I asked him why he became an educator, he said it was his way to thank all of his mentors that he had when he was his students’ age. He asked his mentor, Juan Espinoza, what he can do to pay him back and Espinoza responded, “One day, you’re going to do the same.”

Calderon is many things besides an educator. He is a playwright, and a beat maker. As I mentioned earlier, one of Calderon’s concentrations at Sarah Lawarence was writing—playwriting. During his last semester there, he wrote and produced his own play. Writing is breathing for him. Calderon’s love for writing started on the day he called the police on his abusive dad. In doing so, his dad left. Calderon attempted suicide because he felt bad about what he had done. He went to the bathroom and cried. He remembered that his mother usually kept a notebook and a pen in the bathroom and he used that to write his suicide note.

Calderon’s suicide note eventually turned into one of his poems. Poetry keeps him alive. He saw poetry as a companion because it comes from a lot of pain. He has never stopped writing ever since.