Off the Leash • November 14, 2020 • https://srhsoffleash.org/1716/opinion/performative-activism-doesnt-make-change/ 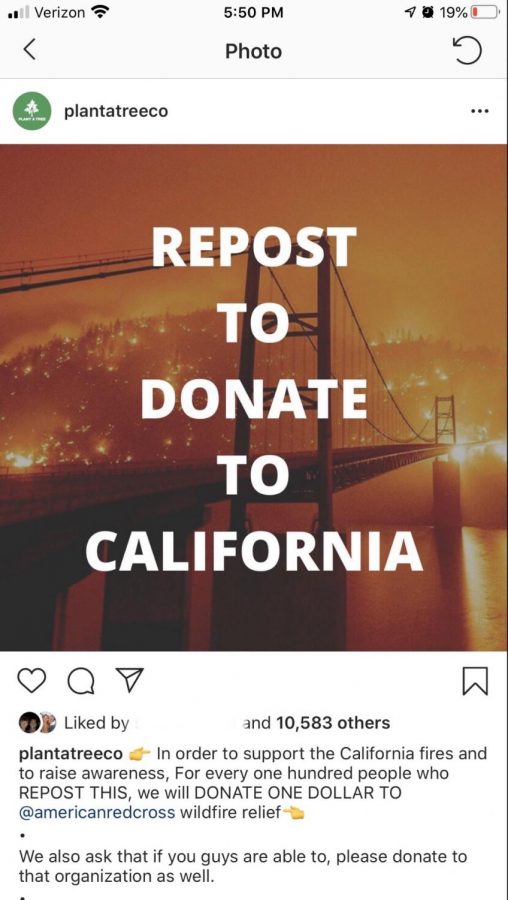 Scrolling through your phone, you decide to open up Instagram. But instead of quality pictures and funny memes, your feed is bombarded with political posts spouting information about the election, women’s rights, or some other hot topic.

Posting activism on social media is the laziest and easiest way to show you care without actually doing anything. While some truly care about certain issues and go beyond just posts, people who pretend to care ruin what positive impact it could have.

How can a picture create real change? Some argue that it helps spread awareness about a subject, and while awareness is important, real change is achieved through actions. If all you do is repost a picture of systemic racism, you’re not improving racial inequality in America. As San Rafael senior Lila Hoeh puts it, “If people truly care about the issues that they are reposting, they should look into related organizations, sign petitions, contact government officials, etc.” You might feel good about spreading “the truth,” but without resources that will actually reform policies, it’s just words.”

According to a survey from Business Insider and Marketing Charts, Instagram is the most widely used app by the younger generation. Most of this can be equated to the fact that Generation Z (those born between 1997 and 2012) grew up amidst the rising popularity of the iPhone. Teens are attracted to Instagram in particular because it allows us to express ourselves, check up on other people’s lives, and get a laugh from funny videos or memes. However, more recently, Instagram is being used as a place for people to post performative activism.

To investigate Instagram’s many uses and determine whether activism on its platform was effective, I created a Google forum to hear what my peers had to say. I posted the survey to my social media and contacted specific people who I thought would have an interesting opinion. I collected 36 responses from only high school students and for the purpose of privacy, the survey was anonymous unless the person chose to reveal their name.

The switch from playful posts to political activism started four years ago when Instagram added “stories,” a feature from another popular social media app called Snapchat. Stories allows users to post a picture from their camera roll or repost something from another account for 24 hours. After a full day, the post expires and no one can view it again.

You don’t have to scroll through anyone’s story, but if you’re like me you tap through the clutter so your homepage doesn’t look messy. In fact, a third of the people I surveyed reported that they regularly check everyone’s stories while only one person said they never use them.

When people do post activism on their stories, it can be in any number of forms including graphs, charts, or a reposted tweet. Most people choose to repost things from popular accounts like @feminist or @chnge to, “educate people.” But when more than 10 people repost the same picture, the intended effect loses its value.

What’s worse is that Instagram is the best place for people to see who ‘cares’ about a certain issue. Let’s say a kid from math class reposted something from Black Lives Matter and claims that “silence is violence” since not enough people are acknowledging the racial issues in America. Yet, at the same time, this type of performative activism does nothing to institute change. This concept drives people to post activism on their story just so they can be seen as progressive and caring. In fact, 44% of respondents agreed that people do post activism to create a better image of themselves while another 30% said people probably did so. So while activism’s intended purpose is to improve and educate society, people instead exploit it for selfish reasons.

Another point of consideration is the tension between people of opposing views. Everyone is entitled to their own opinion and can post whatever they want. That being said, people who are unwilling to listen and be open to conversation about a topic are preventing two perspectives from understanding one another. For example, some people posted on their stories, “If you support Trump unfollow me.” This close-minded behavior contributes to the divide by angering someone who could have been your friend. Not only that but if the Trump opposer proceeds to post liberal activism, they are just spreading more information to people who already agree with them. In this way, people’s personalized Instagram streams represent their beliefs and only validate their preconceived notions.

For others like SRHS Senior Haley Bosch, there are only a few topics she is willing to debate. Since Haley considers women’s reproductive health and voting security as democratic freedoms, she could not understand someone who opposed these human rights. She explains, “If I disagree with someone about taxes, for instance, we’re cool.”

Such polarization in today’s political climate has only contributed to the toxic environment on Instagram. People are more willing to tear each other down and worry about the little things like likes and comments. My poll backs this evidence, showing that the majority of people feel Instagram’s environment has become more unhealthy in the past 4 years. This can be partially attributed to society’s high expectations and the ruthlessness of the internet. Take a recent example where an Instagram post of Rapper Travis Scott dressed as Batman became a viral meme. Scott’s Halloween costume went viral and the harassment led him to delete his entire Instagram account.

Finally, let’s talk about black squares. On June 2, 2020, many people showed their support for #BlackLivesMatter by posting a singular black square. The message was clear, but did it have any real effect? Many people took to the streets to petition and while the movement amassed a lot of attention, black squares were not the cause. Politicians have used countless techniques to gain public support for an issue and the most effective is to present clear evidence of a problem. In this case, the police cam video of George Floyd’s death as well as other mistreated men and women, blatantly demonstrates the injustice. In agreement, 75% of people surveyed said that “Blackout Tuesday” while a show of solidarity, was not effective in creating change. Scrolling through Instagram just to see a bunch of black squares only proved to clog my feed and waste my time.

There are so many ways to be an activist but social media plays a small and ineffective role in creating real change. Too many people post activism as a trend to fit in and make it seem like they care. Simply put by Dr. James R. Bailey from George Washington School of Business, “These days, words are cheaper than ever. Triggering and sustaining meaningful change is arduous stuff.” Reform does not come from sitting and swiping, but actual lobbying and petitioning.