The Divided “State” of America 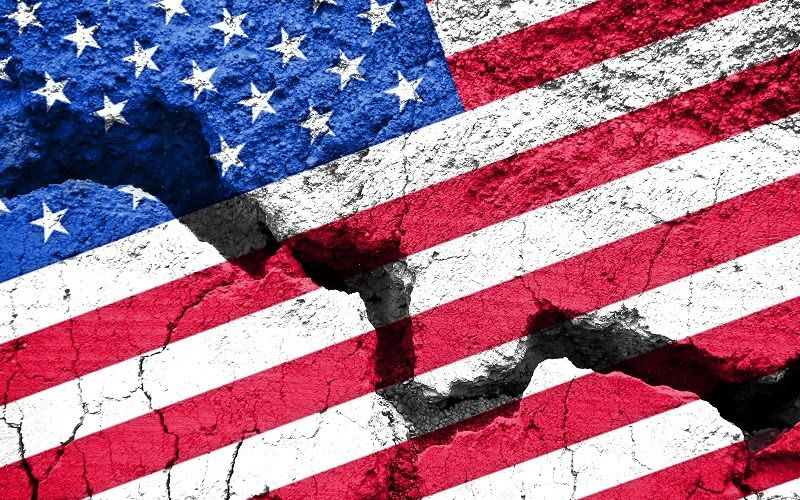 We live in a society where unity and change are necessary for us to thrive. America was founded by people uniting together to change their lives for the better, and we wouldn’t be where we are today without unification. Imagine what America would look like without Martin Luther King, who opened the eyes of many Americans to the need for civil rights. However, in today’s America, there are fewer things binding people together than in the past. We don’t see people uniting; we see people dividing.

More importantly, the animosity between the two parties has increased from 1994 to 2017. In a different survey by the Pew Research Center, 20% of both Democrats and Republicans in 1994 said they didn’t like someone simply because they were from the other party. However, in 2017, this number more than doubled on both sides.

What has caused this political division and what are the detrimental effects on society?

The first culprit is 24-hour biased cable network news. Two networks in particular are largely responsible for this division: Fox News and CNN. Before Fox News was formed, CNN had been around for almost 20 years and was an unbiased platform for people to get their information. It wasn’t until the founders of Fox News felt like conservative views weren’t being represented enough so they created a channel to appeal to the far right. In order to compete with this new conservative-loving, liberal-bashing network, channels such as CNN had to start appealing to a farther left audience. Inevitably, this turned into two biased mainstream networks that would mainly focus on criticizing the other side and glorifying their own.

If you are an average Republican, you most likely get your news from Republican sources such as Fox News. If you are an average Democrat, you most likely get your news from Democratic sources like CNN. The problem with only watching one-sided news sources is that you are getting biased opinions and sometimes questionable information. It’s these one-sided viewing choices that convince people to think that their opinions are facts and the other side is ignorant for not having their same beliefs. This causes so much dissent that political division is inevitable.

Then social media became popular, which increased this division even further. Social media was created to bring people together, allowing them to post content and easily connect with others. However, due to the algorithms built into social media platforms, we are presented with what the social media giants think we would most likely want to see. For instance, Facebook has come up with algorithms that feed people information that reinforce their beliefs based on their search history. In other words, what comes up on their news feed is only one-sided and most people are not actively searching for the other side of the story.

As actor Ed Harris said in The Truman Show, “We accept the reality of the world in which we are presented.” This quote reinforces the idea that people are willing to accept information, even if it is inaccurate, as long as it is inline with their beliefs.

A perfect example of willingly believing fake information online is shown by James Lindsay, who is an author and a political commentator. He wrote and posted a fake academic paper online that was 100% fiction called “Human Reactions to Rape Culture and Queer Performativity at Urban Dog Parks in Portland, Oregon.” He falsely claimed that he spent 1,000 hours in dog parks for one year to find out the number of dog-humping incidents that were considered as rape. He stated that “dog parks are petri dishes of canine rape culture” and that they are rape-condoning places just like human night clubs (implying that human night clubs are rape-condoning places). His conclusion was that we now have to train men the way that we train dogs, with leashes and shock collars, in order to dismantle rape culture. When the editor of the number one feminist geography journal in the world, Gender, Place and Culture, read this story, she was so impressed that she actually highlighted it and gave it an award in the 25th anniversary issue! It is so funny to me that she believed this story without even bothering to fact check it only because it supported her agenda.

As if mainstream media and social media weren’t enough to divide us, along came President Donald Trump. He is the master of causing division in our country. Liberals hate him because of his rhetoric and constant tweeting of lies. Conservatives love him because of his policies and what he has done for the country. He uses his position and power to constantly demean the opposition, creating additional discourse between the two sides. His followers absorb everything he says as facts which leads to distrust and hatred for the other side. An example of this is the coronavirus and how each side looks at it differently. Because Trump was so outspoken with his criticism of the experts in epidemiology, his followers believed him rather than scientists. This misinformation about the virus has given people another thing to be divided about. It’s sad that we can’t even come together as a country in a pandemic and that our President wasn’t able to act more presidential… and follow the science!

There are many people who like to place ALL the blame on Trump for the division in America. Nicole Burak, a Democrat who worked for Senator Barbara Boxer for 24 years, is in this same boat. She, like many others, believes that “Trump is the main reason our country is so divided.” However, as a society, we are also responsible for the divide. We can make the decision to open up our minds and listen to different points of view, while learning to choose not to believe everything we hear or read. We can actively look for more information from other sources instead of becoming complacent with what the algorithms and media are constantly feeding us. Yes, Trump has made an existing problem in our society worse, but people need to become part of the solution instead of placing the blame on just one person.

It is clear that cable news networks, social media, and Trump have led to division and close mindedness in America. We need to be able to unite as a country in order to thrive and survive. This can’t happen unless we make fundamental changes to the way we get our information and form our opinions. It worries me that we have come to a place where peers will end relationships based upon distorted political views. For example, I saw a post on Instagram where a girl said, “Even if you were my friend for 15 years and I found out you supported Trump, I would immediately end our friendship.” I am both frustrated and saddened by these types of close-minded posts. I wish people could step outside of their bubbles and start to do the hard work of listening to others who they normally wouldn’t agree with in order to unite this country. Because even though “living is easier with your eyes closed,” as John Lennon once wrote, living with your eyes open is the only true way to make America great again.