Off the Leash • November 14, 2020 • https://srhsoffleash.org/1725/opinion/forget-paying-tuition-applying-to-college-is-expense-enough/ 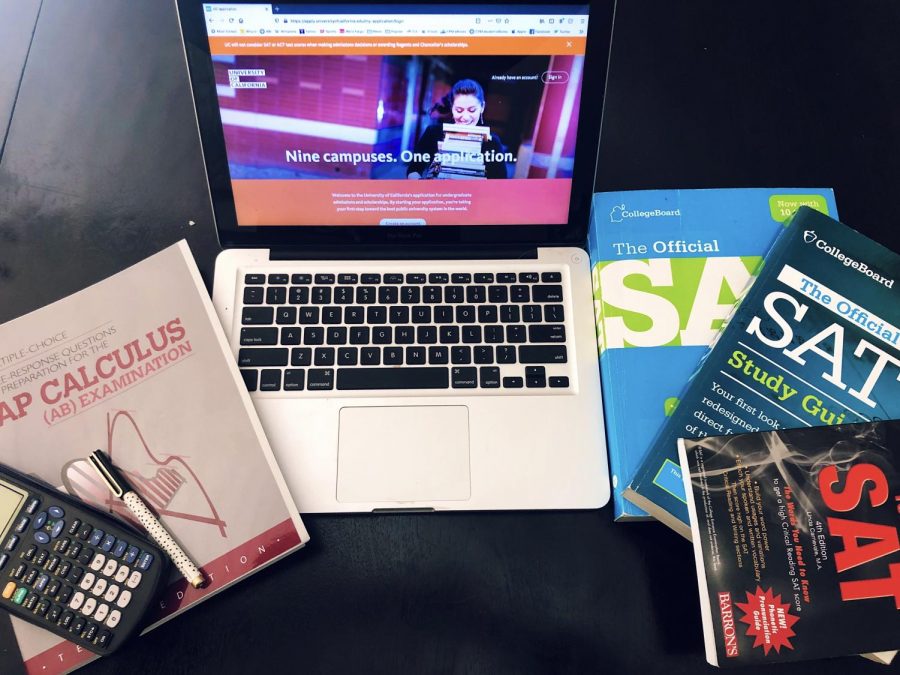 College is too damn expensive, and I’m not just talking about tuition. Higher education has become a system in which there is no opportunity to elevate one’s socioeconomic status, and is designed in such a way that the wealthy remain far more educated than the lower, middle, and even upper-middle classes.

Have you ever asked a student how much they have to pay just to apply? I’ll break it down for you.

The first step students take for college applications are class selections. High schoolers sign up for AP classes, and more importantly, the AP exams in order to be more competitive for college. Doing well on these tests means they may not be required to take, and pay for, those classes again in college. Students take an average of three tests during their time in high school. On the SRHS Student Store Website AP exams are being sold for $105 per exam.

When it comes to actual applications, the average application fee is $43 per college, but can be as high as $90. Schools on the Common Application are $30-$75, while University of California (UC) and California State University (CSU) Schools are both $70 per school applied to.

“In the past, CSU and UC applications cost $50,” says Ms. Cifuentes, who works in the SRHS College and Career Center. “However this year, despite there being a pandemic and many people being unemployed, they have raised the fee to $70.” This begs the question: Do colleges really care that their application process deterred the financially challenged?

“It’s challenging for me because I don’t qualify for the fee waiver,” says Juliana Postrel, a senior at San Rafael High School. “I have to really evaluate if a school I’m applying to is worth paying for.”

To make applications stronger, students often try to get tutoring for both their application essays and SAT/ACT tests. The College Board, which makes the SAT, continues to assert that the test is important in making admissions decisions. Jerome White, a spokesman for the College Board, explained that the company’s own research found the test to be predictive of college success. In a statement made to MarketWatch, he said the SAT can “help to further differentiate student performance in college within narrow [high school GPA] ranges.”

The average cost for an SAT Tutor or College Application Tutor ranges from $45-$200/hr, where students will often have multiple sessions. I will use 5 sessions each for calculating totals.

“I have an essay editor, which is expensive on its own,” explains SRHS senior Katie Arnold. “But I felt kind of pressured to get one, even though I can’t really afford it. I can’t pay for $125 a meeting.”

According to Juliana Postrel, “It was a big decision for my family to get a college consultant, and I was only able to work with her for two hours, but a college counselor can make or break an application.”

In the New York Times article “I Was a Low-Income College Student. Classes Weren’t the Hard Part,” author Anthony Abraham Jack says “I hated the SAT…not because I went to tutoring sessions or met with private coaches but because my more privileged peers did, while I passed the hours at home by myself. (I wasn’t doing practice tests either. I couldn’t afford the book.) Those lonely afternoons served as reminders of my poverty and also my precarious future.”

Robert Putnam, Harvard public policy professor and author of “Our Kids: The American Dream in Crisis,” uses data to show that the achievement gap between rich and poor has grown, partly because kids from middle and high-income families have access to tutoring and college prep resources, while the children of low-income families are unaware of any opportunities they might have,

“If you get a tutor, and can afford one, you are going to get a better score on the SAT tests than a student who can’t,” says Ms. Cifuentes.

“If a Marin Catholic student bombs the SAT, their parents could afford for them to retake it as many times as they need to get into the school they want to,” says Katie. “I know that I couldn’t do that, and a lot of my friends couldn’t take unlimited tests either.”

However, not every student has to pay for tutoring. There is the free option of tutoring on websites, such as Khan Academy, or the small expense of buying the College Board’s Official SAT Guide. But for a real shot at a good test score, students can expect to spend somewhere between $50 and $2,000 preparing for the SAT, while the wealthiest parents sometimes dish out up to $10,000.

As Katie Arnold puts it, “Screw the College Board,” a sentiment shared by many students around the nation.

Oh, and by the way, once you have done the hard work of taking tests, writing essays, and filling out applications to get accepted into schools, you have to pay an acceptance deposit of $50-$300.

Therefore, applying to college costs an average of $2,510. Still following?

Obviously, not every student has an unlimited amount of money, so they have to make decisions on what parts of the application process they can save money on. During the Covid-19  pandemic, most schools have made taking the SAT test optional. But during normal times, it is an inescapable cost. However, a student can save money by cutting back on the number of schools they apply to or the option of filling out their applications without the aid of a counselor, both of which put the student at a competitive disadvantage.

“First you spend $80 on an application, then $300 for a downpayment, then around $30k for tuition, then healthcare, personal expenses, and books,” says Katie Arnold. “Not everyone can afford that.”

The better the school, the higher the tuition. As a result, the wealthy have an easier time attending than the middle or lower classes. The system is driven by money, leaving those who can not afford tuitions and applications (or are unable to qualify for enough financial aid) to forgo better education.

Fortunately, students do have the option of attending community college, which still provides high quality education, but at a significantly lower price. Yet, a more elite school often presents more opportunities later in life.

For example, a candidate for a job opening who has a degree from Stanford University has a better chance at filling that position than a student who went to Community College in their hometown. Often, having an elite school’s name on your diploma can make the difference when applying for jobs, giving the affluent yet another advantage above everyone else.

Some will argue that colleges need the enormous amount of money supplied by students to keep the school running, provide high quality classes, and fund research. However, according to a study by Forbes Magazine, a significant amount of a college’s funds are lost to a “stinking pile of administrative waste and corruption.”

Others will say that college application fees deter students from simply applying everywhere and overwhelming the people evaluating the applications. Yet, no students would apply “everywhere” because every additional school requires multiple additional essays. Being a student myself, I can vouch that no one my age would willingly spend hours writing an essay for a school that they are not genuinely interested in going to.

The college system is designed in such a way that only the affluent can navigate it without compromising their ability to stay afloat financially. With the wealth gap continuing to grow, it is becoming increasingly noticeable that those from the upper-class are the ones most frequently continuing on to tertiary education. As a result, they earn better paying jobs and maintain their status above those who can not afford the exorbitant prices of college. Education is power and wealth, but the system does much to deter individuals from reaching the opportunities they need and climbing the socioeconomic ladder.

“Keeping people locked in the social class they are born into is not a vibe, to put it simply,” says Katie Arnold. “College is an elitist system.”