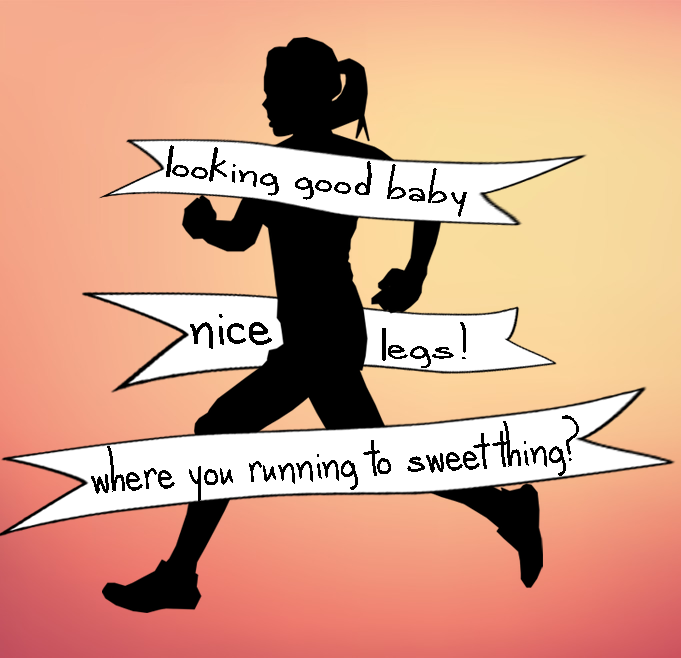 Imagine walking down the street on a regular day. Nothing out of the ordinary, just a casual weekday with light traffic. Suddenly, a car pulls up slowly beside you. The man driving the car leans his head out of the window. “Nice rack baby! Aw come on, give me a smile, sugar!” he yells. Now imagine all of the young girls and women who do not need to imagine this scenario. They can remember it instead.

Men shouting at women to tell them that their bodies are ‘sexy’ is not normal. Verbal harassment has existed since the dawn of time. Males telling females that they look sexually appealing has forever been a popular pastime among men who do not respect women. By common definition, catcalling is when someone shouts, whistles, or makes inappropriate and sometimes sexual comments towards another person as they walk by. Catcalling is not a compliment.

The long lasting stigma of being verbally harassed is tragic, yet still so common and around the world today. From a survey recorded in 2014, it was shown that 65% of women had been victims of street harassment in their lives. These numbers continue to grow and different regions across the country create various statistics – some higher than others. There are some women who like to receive unsolicited compliments from men, but they are the minority. The majority of women feel uncomfortable and emotionally violated upon being verbally harassed. Most women experience their first incident of verbal harassment before they are teenagers, and as young girls, they are taught to be polite, not talk back, and stay calm. In an article published by Psychology Today, the underlying reasons for silence and reluctancy for coming forward are explained. Many young girls and women feel shame and guilt for being harassed, which leads to a hushed response. This becomes the default reaction for so many victims of harassment.

Young girls are told that they should not wear revealing clothing because it will subject them to unwanted comments. Girls are told that they were “asking for it” by wearing a skirt. Girls are told everyday that “boys will be boys.” Stop this madness. Your appearance has nothing to do with being harassed. In countries where women are forced to wear clothing that covers almost 100% of their skin and hair, sich as Saudi Arabia, there are still cases of sexual harassment and rape. Muslim women dressed in extensive layers of clothing are victims of these crimes, despite hiding their appearance and visual identity. The cultures, religions, and countries that we live in are far from the reason harassment exists. When women feel anxious about dressing nice or choosing an outfit that makes them feel beautiful because of the chances they may be catcalled, there is clearly an issue.

In a research study done by a professor from the Industrial and Labor Relations department at Cornell University, the ages of peoples’ first encounter with street harassment was reported. The majority of first experiences were between the ages of 11 and 14. Most females do not enter the stages of puberty until they reach the age of eleven or twelve. For a prepubescent or early pubescent child to be exposed to objectification is beyond wrong.

Sexualized portrayals of women in the media and in society only add to the issue. The ‘sexy school girl’ and ‘sexy teacher’ fascination only makes the roots of objectification and sexualization grow deeper.

At the age of 13, in a store at the mall, I was approached by a man of at least 50 years old. Nearly 5 inches away from my face, he whispered, “Wow little lady, you look real perky.” This was not my first incident of harassment. More recently, I have discovered the art of back-talking to strangers who say rude and inappropriate comments. Phrases such as “can I help you?” and “don’t forget to blink” can be a way of making the perpetrator back off. However, there is never an option that is 100% safe when it comes to dealing with verbal harassers. Women are often followed to their cars or physically harassed after the first received comment, even if they do not interact. In an article published by the New York Times, we hear the story of Ruth George. The young woman was walking to her car before she was murdered by a man who had been frequently harassing her.

When a girl talks back to someone who has catcalled her, she is taking back her power that the man tries to take from her. Men who catcall women expect women to become submissive to the statement and feel glorified, when in reality, it makes them feel vulnerable and at-risk.

Girls and women across the globe are catcalled and verbally harassed everyday. Whether it’s going grocery shopping, sitting in traffic or walking to their car, women are constantly exposed to the verbal perversions of men. Those who whistle and hoot at women are ignorant, misogynistic imbeciles. Catcalling is not a way of showing affection. So many men try to defend their insults with the phrase, “she should take it as a compliment; I wouldn’t have said it if I didn’t think she was pretty,” and this cliche defense needs to die.

The degeneracy of men is not a problem for young girls to solve. Verbal harassment regarding someone’s physical appearance will never be a compliment. Catcalling is a mens’ issue. Boys need to be taught at a young age that teasing girls and pulling their hair is not cute or funny. Men need to teach boys that being nice and respectful will take you a long way. If the roots are torn up from the start – or better yet not planted at all – verbal harassment has a chance of decreasing.