Off the Leash • February 18, 2021 • https://srhsoffleash.org/1831/opinion/black-lives-matter-today-tomorrow-period/ 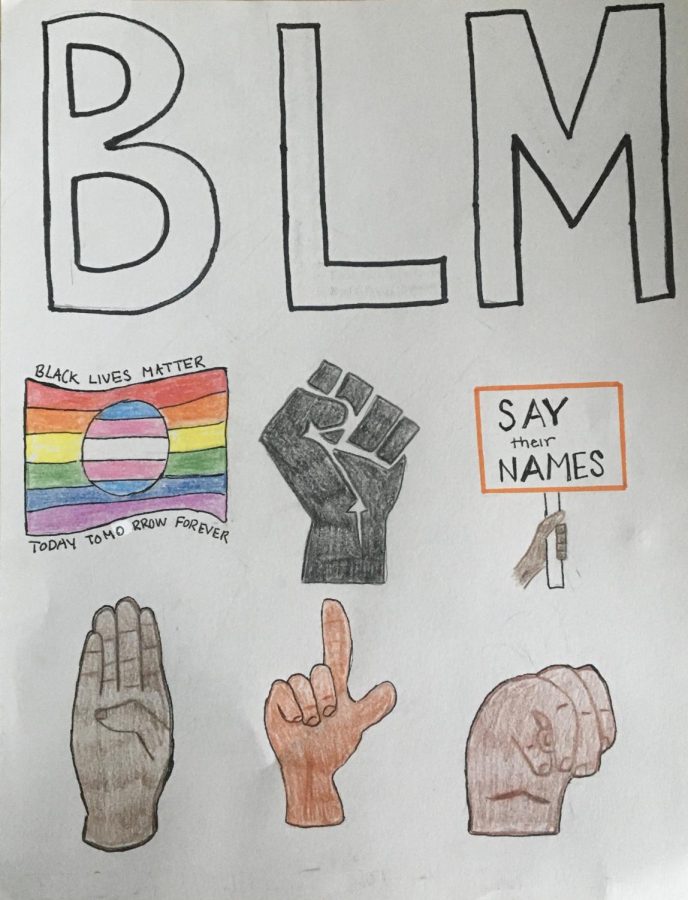 Why do we need Black Lives Matter?

The oppression that BIPOC, or Black, Indigenous, and people of color, people face is nothing new. It is a product of a carefully crafted web of discriminatory practices that create a system that works to oppress BIPOC people and embolden White people. Effects from this machine, known as systemic racism, can be seen everywhere; from the schools BIPOC children attend, to where BIPOC people live, the job opportunities afforded to them, how BIPOC people are treated within our criminal (in)justice system, and the privilege that White people experience in those same areas. It’s also the reason that for centuries now, BIPOC people and their allies have organized, protested, and rioted against our government.

While not focusing on White people in conversations about race is imperative, it is important to address White privilege. To successfully do so, we must first focus on how Whiteness leads to privilege and how that same privilege allows for the avoidance of racial justice issues. So, here we ask our White readers to take pause. How did you feel when you read the words “White privilege?” When first confronted with the privilege that their skin holds, white people often snap back with “But I’m not racist.” “I earned what I have.” “There’s no such thing as white privilege.” All of these statements are untrue. This is because we’ve had the privilege of being able to avoid conversations about race. Within our society, Whiteness is seen as default, whereas any other race is seen as other or an actual race. When privilege is brought up within the context of Whiteness, White people get defensive. Many of us equate privilege with supremacy. So when a BIPOC person tells us that we have privilege, many of us get defensive, saying “Well, I’m not racist.” And herein lies where the burden of conversations about race falls on BIPOC people. White people fail to recognize and reckon with their Whiteness and therefore their privilege. We try to become “the good White person,” therefore attempting to shrug off this self-perceived hindrance of privilege. Then BIPOC people must deal with both the oppression from the aforementioned web of systemic racism and the White person’s guilt. This avoidance and oppression rightfully reach a boiling point, leading BIPOC people to call for change. In this series of articles, we will attempt to tackle the conditions in which racism was allowed to flourish and the steps that have been taken to try to rectify those same conditions.

The Black Lives Matter movement is not the first organization of its kind calling for racial justice, but “Black Lives Matter” has become a national rallying cry for BIPOC people and their allies. Black Lives Matter asks for the bare minimum: for Black bodies and the lives that they live to matter the same that White lives do.

At first, people were fighting to say the simple yet incredibly complex phrase. Now, “Black lives matter” is painted in bright yellow letters on the road to the White House, with countless celebrities and chief executives embracing it. The three words were once a lesser-known rallying cry against racial profiling and police violence, and are now a global call out against police brutality and systemic racism.

The Black Lives Matter movement first took off in spring 2012. After the murder of Trayvon Martin, large protests began occurring in multiple cities, calling for justice against racially motivated crimes and police brutality. This collective avocation brought together three women, Patrisse Khan-Cullors, Alicia Garza, and Opal Tometi, women who would go on to found the Black Lives Matter Movement, and further lead this movement forward. These protests would go on to encourage justice for countless deaths from police brutality, with all of the victims having a link of similarity, being Black. All victims advocated for in these protests were Black, and the movement called for justice for their death, the arrest of the police officers involved, and reformation of racist systems in America. For example, the murder of Trayvon Martin was largely protested and advocated for by both the general public and the court.

Trayvon Martin was an unarmed American 17-year-old, with no criminal record, when he was shot and killed by George Zimmerman on February 26, 2012, sparking national controversy and unrest. Zimmerman’s initial release and later arrest sparked a national debate over racial profiling and the role of armed neighborhood watch members in law enforcement. The case became a social media phenomenon and national story, with Zimmerman’s critics alleging that racial antipathies may have motivated his actions. In fact, former President Barack Obama stated, “If I had a son, he’d look like Trayvon,” calling for the case to be investigated. Zimmerman was then charged with second-degree murder on April 11, 2012, with additional information coming to the media’s attention that made the case even more highly charged. The trial began on June 24, 2013, after the selection of an all-female jury. The following month, on July 13, 2013, the six-member jury acquitted Zimmerman of murder, triggering mostly peaceful protests in several American cities.

The Black Lives Matter Movement aims to create an equitable society for members of all races. Among their demands to create such an environment are defunding police and prison systems, reforming our criminal justice system, and restructuring tax codes to create sustainable wealth redistribution. Police department budgets and redistributing those funds towards essential social services that are often underfunded, such as housing, education, employment, and mental health is imperative. Major tax legislation enacted last December will cost approximately $1.5 trillion over the next decade and will deliver windfall gains to wealthy households and profitable corporations, further widening the gap between those at the top of the income ladder and the rest of the nation. So every wealthy household has fewer taxes than normal, middle-class households. Minneapolis City Council approved to move $1.1 million from the police department to the health department to fund civilian violence interrupters who will mediate violent conflicts and help prevent further trouble. The City Council is trying to help civilians by taking money from the police and giving it to people who have been affected by police violence. Some people from the Minneapolis Budget committee, like Phillipe Cunningham, support the “cure violence” which includes the well trained, unarmed community responders, referred to as interrupters. The city is facing a nearly $98 million budget shortfall due to the pandemic and the unrest which followed the incident in which police killed George Floyd.

The Minneapolis Budget committee is trying to help communities that have been affected by the police.  City governments across the United States today are spending a lot more money on policing than they did 25 years ago. In some cities, precipitous shortfalls in city budgets have caused city managers, unions, and police chiefs to take drastic decisions, cutting costs in unsustainable ways. If tax policies were better designed to address these harms and create more opportunities for people of color, state economies would be more equitable and likely also would be stronger. Discriminatory public policies and racially prejudiced public and private actions of the past contributed to a historical context in which people of color were systematically held back.

The Black Lives Matter movement is an increasingly strong movement that is trying to accomplish equality for the Black community. Recent tragedies have impacted more and more of society. For example, the recent death of George Floyd has impacted the world. He died in Minneapolis, Minnesota on May 25, 2020. Accused of using a fake $20 bill to buy a pack of cigarettes at a convenience store, Derick Chauvin knelt on George Floyd’s, for almost nine minutes, not letting him breathe. Three other ex-officers were on scene, Thomas Lane, J Alexander Kueng, and Tou Thoa, but did nothing. After his death, hundreds of thousands of people began protesting all over the USA, with international protests happening as well.

Urging changes to be made in systemically racist institutions such as the police system, many people encouraged the defunding of the Minneapolis police force through protests and riots. This led to the trial and charging of Derick Chauvin, who was charged with second-degree murder. Furthermore, the other accompanying police officers are charged with aiding and abetting second-degree murder. Furthermore, Minneapolis lawmakers disbanded the city’s police department, the Mayor of New York City vowed to stop funding the city’s police department and move it to the social services, and Democrats in congress banned chokeholds, made it now mandatory for officers to wear body cams.

More recently, the police officers involved in the Breonna Taylor murder has been fired more than three months after her death, but the charges were dropped.  The officer barged in without a warrant and at the wrong address. In fact, Breonna Taylor’s family attorney stated the police officers were at the wrong address and had the suspect already in custody. The officers involved were instead, charged for the bullets fired that did not kill her, and instead went into neighboring apartment walls, etc. This decision caused major protesting, for both Breonna Taylor and other victims of police brutality such as Trayvon Martin, Jacob Blake, Elijah McCain, Eric Garner, Micheal Brown, Cristian Taylor, Manuel “Mannie”, Elijah Ellis, Micheal Brent, Charles Ramos, Dreasjon “Sean” Reed, Tony McDade, David McAtee, Walter Wallace, Kevin Peterson and many more. Black Lives Matter protests continue to ensure that this list does not grow.