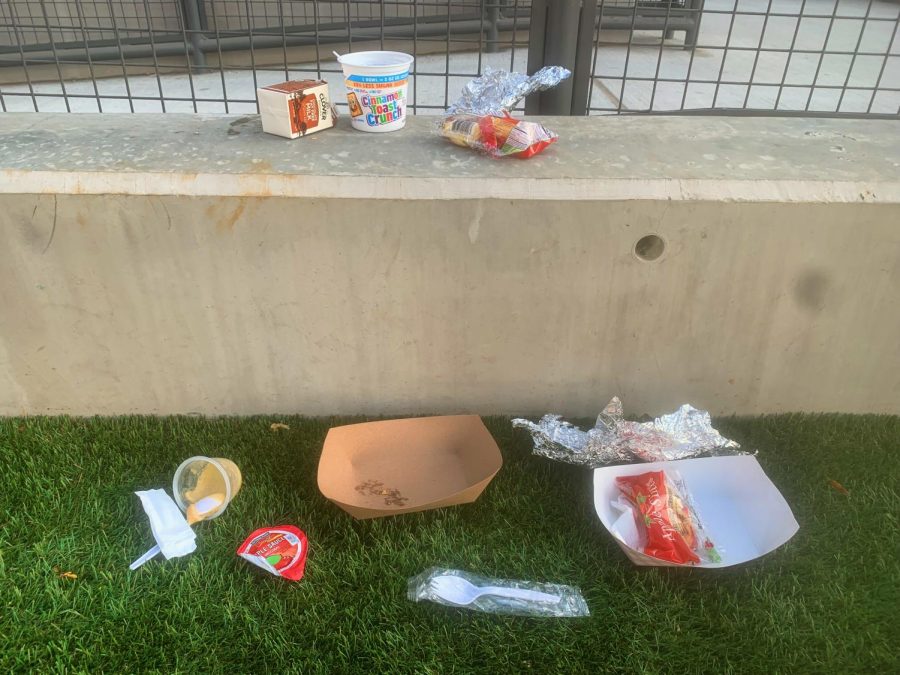 As San Rafael High students return to in-person learning for the new school year, old habits arise. San Rafael High’s beautiful campus is being wrecked by trash. There are piles of empty milk cartons, chip bags, plastic bowls, and much more scattered all around school grounds.

The amount of litter all over campus has spiked up again. Students aren’t picking up their trash after eating their food. It only took seven weeks for the campus to look like a landfill. Not only does this frustrate the staff and make the campus look unpleasant, but it also harms the environment.

“We’re really disappointed. I know it’s been a shift from distance learning and it hasn’t been the same as being on campus, with the same responsibilities. I feel really terrible for our custodial staff who are working really hard,” said Mr. Peck, the acting principal of SRHS. People have noticed that the main problem is on the new quad and on the school’s bleachers.

Leaving trash on the tables and grass may seem like the easy solution for students but it has become a struggle for the custodial staff who already have other work to deal with.

“It makes me frustrated that students aren’t picking up their trash. It makes my job more difficult having to clean up after students who should already know how to clean up after themselves,” said Oscar Caballero, a custodian at San Rafael High. He stated that the trash left around campus is putting him behind his work. “I usually spend from half an hour to an hour cleaning up the trash after brunch and lunch. It puts me behind all my other work by an hour or even two.”

“Our custodians have been working their butts off since this pandemic started. They always have but they’re working even harder to keep it safe for students to be at school,” said Ms. Zampino, a school counselor who is also upset over the situation. “We work really hard to have a welcoming campus and when we have guests or when students come on campus I don’t like that the first thing that they see is just a pile of junk on the floor.” The situation is beginning to get out of hand. The trash starts all the way from the walkway entering onto the school’s parking lot.

The SRHS staff has been discussing possible consequences if a student is caught not picking up after themselves, however some have different points of view.

“Any consequence needs to be something we can implement and follow through with in the long run,” said Ms. Pikk, a science teacher at SRHS. If any consequences are placed, they should be some that can benefit the environment and help students learn.

“I don’t really agree with something punitive. I just want folks to feel good about taking care of the space that we all share,” said Ms. Zampino. She believes that simple consequences aren’t good enough to fix this situation. “I try to go around and thank those who are cleaning up after themselves and hope that acknowledgement will encourage folks to keep doing it.”

However, Mr. Peck has other plans. “I do think disciplinary action will need to be taken. When we see students are retiring and they’re not picking up after themselves, we’re going to bring them in and contact their families and there will be some sort of disciplinary action,” he stated.

Some students believe that we can encourage others to throw away their trash. Educating others may be the real solution to the littering problem at San Rafael High. “I feel like the best way to go about that is to make information about littering more mainstream. Maybe posters around trash cans and around the school would help,” said Gabriella Finell, a sophomore at SRHS. This could be a learning experience for all the students at San Rafael High and this teaches them about the negative impact their actions can have on the environment.

“I think if we had some sort of incentive to get people to clean up it would encourage kids more than us just telling them to,” said Sarah Casper, a junior at San Rafael High. Although students should already know that it’s not okay to litter, it’s also good to simply remind them to pick up their trash once they are done.

“I’d really appreciate it if students could please clean up after themselves. Please throw your trash into the trash cans once you’re done eating,” said Caballero.