Off the Leash • November 22, 2021 • https://srhsoffleash.org/2071/features/redwood-graduate-ana-anguiano-urtiz-provides-a-kind-light/ 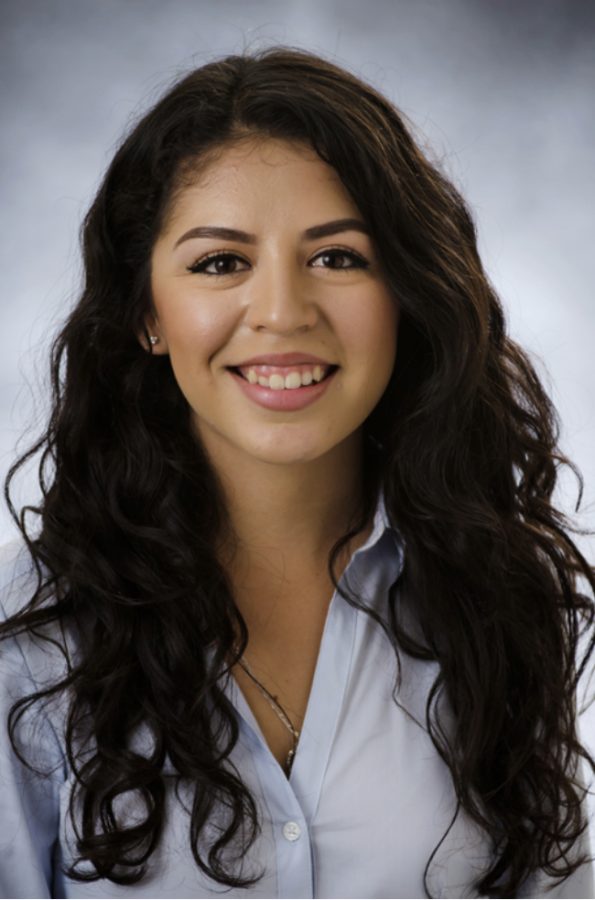 Ana Anguiano Urtiz has always wanted to be that person her parents needed when they immigrated to the United States from Mexico. As a first generation student and a child of immigrants, Ana had heard stories about the numerous hardships that her parents faced coming to the U.S.

“If someone would have supported my parents this way maybe the outcome would have been different for them. I get to do that now with my job.”

Ana is a graduate of Redwood High School’s class of 2013. As a minority at Redwood and with no word to describe her experience at the time, she felt like a puzzle piece that didn’t fit with the others in the box.

“It was very challenging to develop a sense of identity that felt true to me,” she says. “There were many instances where assumptions by peers (and occasionally a few staff ) were made about me regarding how I was supposed to act and behave and what my intellectual abilities were based on my ethnic background.”

As someone who was an ELD student for quite some time, Ana experienced a lack of confidence in her English abilities. She explained that she never thought she would be good at English, until someone who believed in her changed her perception of that.

From there, she went on to UC-Merced for her undergraduate degree. Her choice to go to UC-Merced was influenced by her pursuit of a diverse environment. Although Redwood wasn’t ethnically diverse, she would find a school that was. After her time at UC-Merced, she went on to get her masters degree at University of San Francisco. By that time, Ana was involved in several programs such as 10,000 Degrees. Working with students and helping them to prepare for college and life really gave Ana a direction of what she wanted to do.

Although she didn’t grow up in San Rafael, Ana grew up nearby and felt it was home because of her family residing there too. She knew she wanted a job that focused on meaningful work around the San Rafael community. Around the time before Ana graduated from USF, San Rafael High school was looking for a Bilingual ELD Counselor and had reached out to her.

“I felt like a lot of things clicked…All students deserve an opportunity to reach their fullest potential without their home or school being a barrier to that,” she says. “When I heard about this job I thought it was perfect because I was going to serve a community that was so resilient.”

Armando Oseguera, San Rafael High School Assistant principal, explains that before there was this position, the academic counselors would support the ELD/Newcomer students along with 350 and more students in their caseload, affecting the amount of time counselors could spend supporting ELD/Newcomer students both academically and emotionally into the school year.

“Being able to have Ana on campus has allowed for the counseling department to spend more time on identifying the individual needs of ELD students, meaningfully connecting them with resources, and creating positive bonds between the parents/guardians and SRHS, He further adds, “Ana is creating connections with students, parents, and community stakeholders at a level that previously was not possible at SRHS.”

“It’s a new role, I’m still learning like a lot of my students are so there are still things that I need to figure out, “Ana states. ”I’m learning from the ELD teachers who have been doing the work before we had this role at this school.”

After meeting with her and Ms. Mazariegos, Bilingual Newcomer counselor for Terra Linda and San Rafael High School, to discuss a project with two other students, I got a chance to understand the work she does. Her days as a counselor are not the same all the time and typically depend on the needs of her students. When there’s a new student, Ana does intakes. She meets with the family and students in the mornings (so it’s easier for the family) to discuss not only academic topics but the students’ story. It’s personal and helps Ana create a connection with the parent or guardian of the student.

”It’s important for students when they come from another country…that they are greeted with someone warm and genuine. That interaction [greeting a student] and acknowledging that it’s a whole new country and school can ease a student’s anxiety. I think that’s a big impact that she has,” says San Rafael High School Counselor Avi Fernandez.

“When I first started here her support really helped me get comfortable with this school,” says Rudy Ramos, a 9th grade student at San Rafael High School. “She’s just a really good person.”

It’s important to mention that although Ana is a good resource for her students, she values making connections that will further support her students in things she cannot address. She has and continues working with the Huckleberry Youth program. She helps conduct “Charlas,” which are talks, in Spanish, about anything her students would like to address and are led by Huckleberry personnel. Recently, Ana and Ms. Mazariegos have partnered with Link Crew Class students to open the doors for their students to engage with other students through tours around the school.

In truth, Ana Urtiz is an example of the Latinx experience in Marin County. It’s already so tough to navigate a new country and culture. First generation students have to walk with the pressure of looking for support outside their family circle while also knowing that not succeeding isn’t an option. For first generation students that come from a different country, they also deal with presumptions about their success on top of having that familial pressure to succeed. Ms. Fernandez touches on the trauma these challenges can ignite when she mentioned that both she and Ana have similar experiences as the Latinx students in San Rafael High School.

“She’s so kind and genuine… a great person to work with. I feel a really good sense of camaraderie with her especially since I’m also a Latinx woman,” Ms. Fernandez says, “It’s a bond that we share and we’ve spoken about in our offices.” She later touches on holding safe spaces at their office to debrief on a lot of the trauma that they remember facing that they see with their students.

Ana Urtiz is a new step in the right direction for our school to provide support for an underrepresented community of students in San Rafael High School. Ana is a Mr. Winkler for many students. She’s a kind light to me and many students at San Rafael High school who have been new to this country beforehand and have experienced receiving little to no support from the school systems. Although it’s been around two months into the school year, Ana is building a safe space for a community of students previously pushed aside and underrepresented at San Rafael High School.

While sitting down at her office, as Ana offered me stickers and candy from her jars, I inquired about the after of her work at our school. She told me it’s hard to see the after, the outcome. But, it’s the little things that mark the progress her students have made that make her realize how much progress students have made.

“We rarely get to see the outcome of our work,” says Claire Mazariegos. “But, whenever we go out for lunch and see our students engaging in spirit weeks at school it makes us so happy.”

“I always think, ‘That’s my student standing at that table!’” Ana exclaims. “It makes me happy seeing my students engage with our school activities.”