Off the Leash • February 14, 2022 • https://srhsoffleash.org/2175/showcase/the-disparity-between-private-and-public-education-why-does-it-matter/

The Disparity Between Private and Public Education: Why Does it Matter? 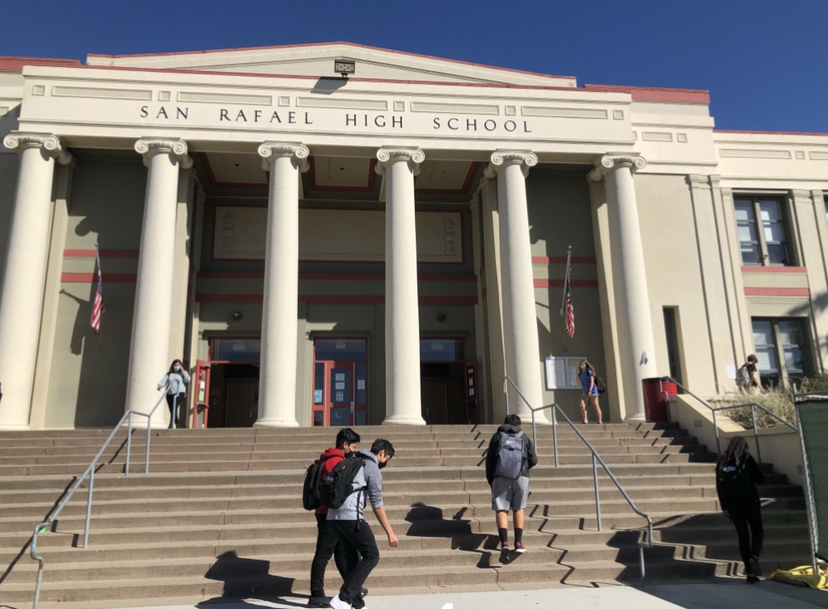 Walking around the Marin Academy campus with its crisp, white buildings and scent of freshly baked pastries, it’s hard not to feel a pang of jealousy. A new pool, a new science building with huge, modern windows, a cafeteria with all the food options you could ask for. Why do they get so much and it seems as if we get so little?

Coming from a public school it can be hard to address this issue objectively. There are feelings of frustration, jealousy, and the persistent idea of lost opportunities. This missed potential can feel like a devastating loss of experiences, privileges, and resources. What those resources could garner us is a hypothetical, a ‘what if’ situation that will frustratingly never be answered. I’ll never know if I could have become a better student, a harder worker, or a more intelligent, independent person. I don’t want to pin the root of everyone’s academic downfall on enrollment in public education, however, I think it is stupid to pretend that better facilities, closer-knit communities, and fully-funded extracurriculars don’t contribute to the success of an individual.

The issue is that we could have gotten the best, but we didn’t. I believe that every child deserves the best quality of education, to not be forced to ponder on the hypotheticals of what they could have become. It should not be an, ‘I wish I had that’, it should be an ‘I had that, I used it, I prospered.’

“Turning a blind eye to the disparity in and outside of campus is something that being a student at SR has unfortunately left me very familiar with,” says SRHS senior, Natalia Davidson.

To better understand the extensive facilities offered at private schools such as Marin Academy, I’ve broken them down into educational and recreational categories. According to Minna Hibbits, a Marin Academy senior, notable educational facilities include school-provided Macbooks, I-Pads, a new Science and Innovation Center (SIC) building, private practice rooms for the music department, and a learning lab where students can study and receive tutoring from teachers.

“[Marin Academy] has amazing resources for pretty much any area you could be interested in. I’m part of the visual arts program, and we’re given high-quality supplies each year to keep and are free to use and take home the school’s iPads to do digital art,” says Hibbits, “We have INCREDIBLE lab resources too, and they recently installed a giant building entirely dedicated to science classes called the SIC.”

Marin Academy does not cut corners with its recreational facilities either. Hibbits highlights the school-provided meals, garden hammocks, wellness center with athletic trainers who personally assist students with sports injuries, and a multitude of areas dedicated to studying.

“The food is really tasty, high quality, and healthy. There are always vegetarian and vegan options. They also bake fresh pastries every day and lots of other really yummy things,” says Hibbits, “The food is honestly better than what I usually eat at home.”

From this student-provided perspective, it is clear that there is a staggering difference between private and public school facilities. But, why is this?

In most cases, the Legislative Analysis Offices states that, “private schools generate most of their revenue from tuition.” Additional funding comes from donations (typically wealthy alumni or members of the community) and a relatively small amount comes from fundraising. Marin Academy’s full tuition is $53,086 with 25% of families receiving some sort of financial aid. Branson, The Marin School, and San Domenico all share similar statistics. (Marin Catholic is an outlier, asking $23,000 for tuition.) In comparison, California public schools spend an average of $12,700 per student according to the Education Data Initiative.

“It’s frustrating, but I don’t think the lack of facilities at SR is something that students, admin, or even the board can really change,” says Davidson, “Funding public education in the US is not a priority and I don’t expect it to be anytime soon.”

While it is true that the federal government spent almost $752.3 billion on public education in 2019, this only accounts for 9% of public school funding. According to the Public Policy Institute of California, state property taxes make up 58% of funding, and other local sources make up the remaining 32%. But it is this majority funding from state property taxes that has created another issue.

According to the American University: School of Education, “The financing systems of public schools in the US ensure that community wealth disparities carry over into education. By relying largely on property taxes to fund schools, which can vary widely between wealthy and poor areas, districts create funding gaps from the word go.”

From this information, we can determine that the disparity between public and private schools in Marin is just a small example of a larger-scale issue. Marin, in particular, is made up of mostly high-income families. You can imagine that counties with higher economic inequality are experiencing these same issues on an amplified scale.

“Because teachers are so available, it’s easy to develop one-on-one relationships and form close bonds. I have always felt really supported by my teachers and inspired by them as well,” says Hibbits, “They will always take the time to help students and put in the effort to get to know you as an individual.”

The small student-to-teacher ratio also means that class sizes are smaller. Hibbits says that the majority of her classes have ten to fifteen students.

“It definitely contributes to the quality of our education, because you can never get “lost” in a class… I used to have a crippling fear of speaking up, but I’ve become much more confident because of the classroom environment,” says Hibbits.

These small class sizes are common throughout other private high schools in Marin. Hudson Wunderlich, a Marin Catholic senior says, “The small class sizes, especially for language classes, help me learn because you have to participate more. Which, for Italian, means that I actually have to speak the language. This makes me more successful in the class.” His AP Italian class has only eight students.

It is the unfortunate reality that these small class sizes and one-on-one connections are not feasible in a public school environment. With such a large number of students at SRHS, dozens of teachers would need to be hired, classrooms built, and our campus expanded. We are already struggling to fill staff requirements. As a result of the pandemic, many teachers have been leaving their positions. The fact is, public schools do not have the money or resources to foster this environment.

I believe that students struggle because of this. The “lost” feeling Hibbits expressed and the lack of feeling fully supported by a team of staff who can connect with each student individually can be really alienating.

“I think there are about 35 students in my math class. Whenever I ask a question I feel like I am a burden,” says Davidson, “I think smaller classes would be better for both teachers and students… I would definitely feel more comfortable speaking up and asking questions.”

I’d like to stress that this is not the fault of the staff at SRHS. With 4 counselors to a student body of 1,333 and 1 teacher for classrooms of over 30 students, it is impossible to create the connections facilitated by private schools. Again, it is a funding issue.

Jenn Hatch, the head SRHS girl’s tennis coach, explains that one of the biggest differences between our tennis team and private school tennis teams is the coaching pay. Hatch receives $2,250 and the four assistant coaches receive between $200 to $500. In comparison, Marin Catholic pays their head coach $10,000.

“What that does is change the coaching from me, a volunteer who is not at all a tennis pro, to someone with more experience teaching tennis and gets paid for it. This can make a big difference in skill level for the players. More money could equip the team better and provide higher-level instruction,” says Hatch.

It’s a great accomplishment to be able to pay for your child’s education and it is completely rational and reasonable to want what’s best for your child. But do you believe that lower-income families do not deserve the same quality of education that your child receives simply because they are unable to afford it? If you can imagine, for example, being a lower-income parent and the conflict that arises when you want the best for your child, but cannot provide it. Educational opportunities that would foster the growth and development of your child’s talents are inaccessible because of your socioeconomic status. High-quality education should not be unreachable and yet it is. Every child deserves the opportunities and quality of education that private schools provide. The disparity between private and public schools should be addressed and funding towards public education should be reformed in order to bridge the gap between private and public. To be clear, the argument is not that private schools provide a quality of education that is too high, it is that public schools are unable to provide the same or similar quality of education with the limited funding they are granted.

I’d like to reiterate that I do not claim to understand the financial decisions that are made by the SRCS Board of Education. I trust that they are allocating their limited resources to the facilities they determine will be most valuable for SRHS. This is not a critique of their financial decisions; it is a critique of the small budget we are given compared to the seemingly endless supply of cash funneled into private high schools in and outside of Marin.