After 20 Long Years, the SRHS Weight Room Has a Fresh New Look 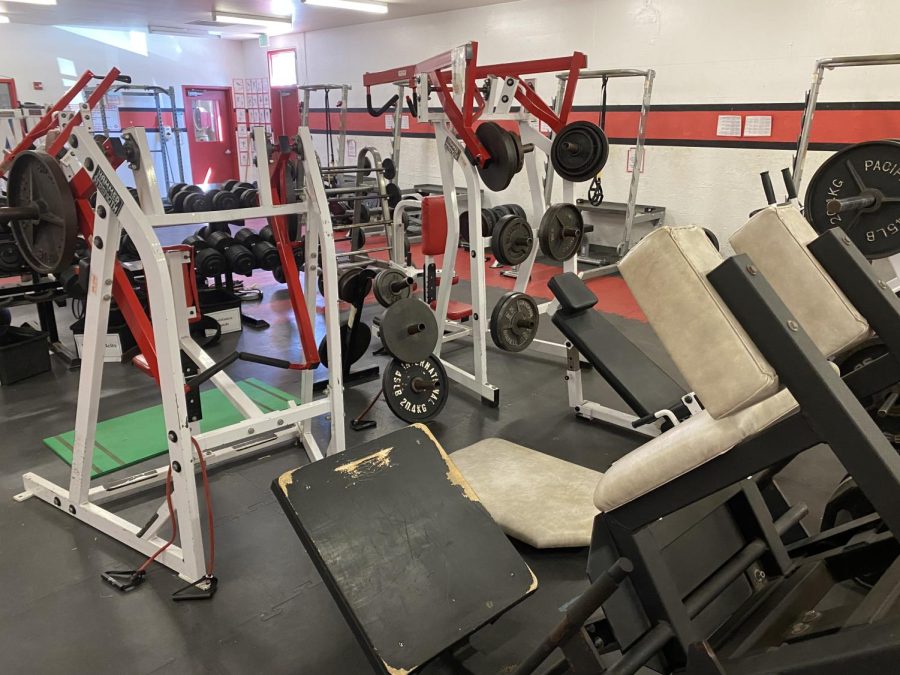 You walk into the weight room ready to work out and you hear the usual banter between student-athletes and blaring music. Once you get ready to do some strength training, you quickly realize that there aren’t any 10, 12.5, or 15 -pound dumbbells available. As you walk around the weight room, it becomes increasingly difficult to find a space to work out and you notice the rust-covered equipment and ripped benches. After the unpleasant experience, you decide to leave and go elsewhere.

After 20 years, the San Rafael High School weight room is getting its long-overdue makeover. This renovation will include new equipment and an overall aesthetic modern upgrade. This renovation will have changes that significantly impact our female students and those who are new to weight lifting.

Jose De La Rosa and Jeremie Brunet, a teacher and coach at San Rafael High, had proposed this idea to the Olympic Club Foundation because they thought it would impact all student-athletes. After doing so, they received a $10,000 grant as well as donations from private donors: WeAreSR, San Rafael High alumni, and The Athletic Boosters. The total cost of this project would come out to be $35,000.

“It looked really old and crusty, some of the seats were broken or outdated, there were some things missing. One of the biggest things that Jeremie and I noticed was the lack of it being feasible for our female athletes,” said San Rafael High School athletic director Jose De La Rosa. “We didn’t have proper weights for our female athletes. Like the ten-pounders, we only had one set. It wasn’t a weight room that was feasible for all our athletes.”

When asked about her thoughts on the weight room, Sarah Mardesich, a junior at San Rafael High, said, “My first impression was that it was great SR had one, especially for student-athletes. I was concerned though because it seemed pretty dirty and unkempt.” She later explained that she thought there was not enough equipment suitable for female athletes.

“There were a lot of old weights, a lot of old stuff and there wasn’t that much space. I’d like to see a cleaner weight room with new equipment,” said Kendrick Ruiz, a sophomore at San Rafael High.

“I feel like the weight room was too cluttered and the equipment was pretty outdated,” said Seamus Lubamersky, a senior at San Rafael High.

Together Brunet and De La Rosa worked many hours moving around equipment, cleaning the mats, cleaning the walls, and planning the layout of the weight room during their winter break. With many things to do and lots of heavy lifting, De La Rosa and Brunet were able to get many community members as well as students to help them lighten the load.

“Several different winter sports like boys and girls soccer helped us move weights around to clear up space. The football program has helped out as well as several alumni and coaches from other schools,” said Brunet.

Because they were able to get a lot of help the process was sped up. However, due to the covid surge after winter break, the entire project was set back a few weeks. What was supposed to be a grand re-opening on January 18th turned into a day of rearranging equipment that was scheduled to arrive way before.

“We had to reschedule games and do a lot more work in the office which could’ve been spent here,” said De La Rosa. “We had planned yesterday to be there all day but we had to make up a basketball game so we had to be at basketball for a few hours.”

Although there were a few setbacks, Brunet and De La Rosa were still able to fix the weight room in the coming weeks. Some of the new equipment has already been installed and used by some student-athletes before the project is completed.

“We bought and set up four state-of-the-art squat racks that have a bunch of attachments. We have 2 extra of each weight, making sure that we have enough light weights to do a lot of repetitional work and make it accessible to everyone,” said Brunet. “We found an application called Platform where as a coach I can make each of my athletes a profile and start developing a weight lifting routine that’s for every student-athlete. Being able to utilize platforms like that really helps give coaches an extra edge and more information.”

“I’ve seen some of the new equipment and how clean and nice it looks now and I can’t wait to get in there and use it again,” said Mardesich.

As the weight room reaches completion, Brunet and De La Rosa hope to build an environment that is for everyone and hope to create that “off-season grind” kind of culture within San Rafael athletics. They encourage students to look into the weight room and check out the new fresh look.