A Strict Dress Code Continues the Cycle of Misogyny 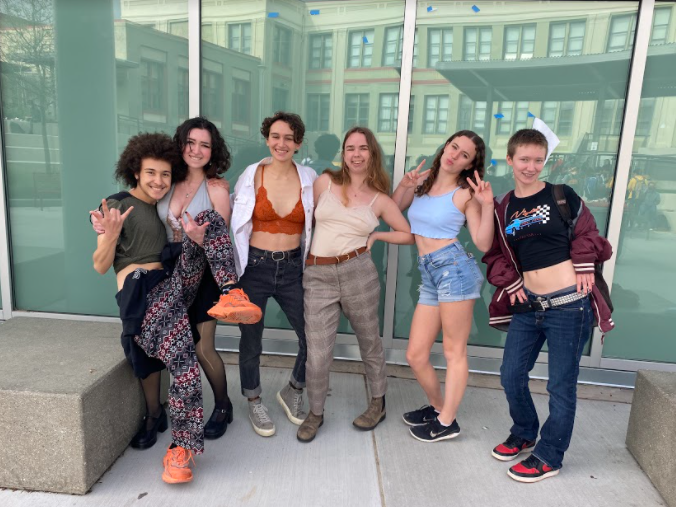 In middle school, if you went to Davidson, I’m sure we all remember the dress code. No shorts above the knee, no spaghetti straps, no cleavage, no midriff, no sagging, and no inappropriate symbols or designs. The whole school reeked of insecurity, Axe body spray, and B.O. in the hot summers. But who did these rules really affect the most? Young, impressionable, and insecure girls, as well as how young boys perceive them. “I remember I was wearing a top that would only show midriff if you stretched. When I stretched, like an idiot, Ms. Shenson called me up in front of the class to show them all what I was wearing while she called the office,” says Maria Caldron.

But young women were not the only ones affected, as it also became a normal thing for men to see women covered up. So of course when girls started to show more skin, men had more of a reaction as a result of not being used to it. “I remember in freshman year PE I heard guys in the boys locker room talking about the girls at our school and their bodies. It was clear that some guys were uncomfortable by the conversation but they didn’t speak up about it,” says current senior Jose Chavez.

I was first called a slut by a guy in 7th grade when I was one of the first to wear (knee-length) shorts when it just turned summer. He of course didn’t see anything wrong with what he said, as girls didn’t usually wear shorts at school.

“One time a teacher flat out said it was because I had big boobs, which was so inappropriate,” says Ziegler. “I feel like there really is no need for a dress code because we all should be at the maturity level where someone’s body doesn’t distract us, teachers shouldn’t be thinking about minors in a sexual way what so ever.”

In other schools such as private schools where uniforms are enforced, the clothing isn’t tailored to each students body type, and as a result can have to be readjusted often or feel irritating to the skin. “I went to a private school that enforced uniforms. I was way more distracted because it was uncomfortable and didn’t really fit well. On top of that, it seemed like a lot of curvy girls and girls of color were targeted more,” says senior Emily Spence, “it’s such a power play, and it reads as pedophilic.”

Ms. Pikkarainen, the environmental science teacher commonly referred to as Ms. Pikk, shares a differing opinion. “I think the dress code is set up to encourage and promote professional educational attire by all students and staff,” she says. “School is to be a place where students are learning about life and to be more aware of the world around them and be ready for a professional job one day. I think in many ways, the dress code is one way to support a safe learning environment for students and staff.”

But why should dressing differently affect how people treat you, professionally or not? Shouldn’t people be taught to not judge a book by its cover? Why is it unprofessional to want to wear less clothing when it’s hot out? We’re all humans, with bodies, so why would showing more of it make it so people take you less seriously? If I can go to school on a regular day and see a whole dude’s butt crack from his saggy draws, why should a little bit of cleavage even matter to anyone.

“I’ve had teachers call me out for outfits completely in line with the dress code and made some pretty out of pocket, rude comments that were really unnecessary,” says Ava. “One teacher flat out said it was because I had big boobs which was so inappropriate. I think girls are more affected by the dress code, not just in a written way but they also seem to be targeted a lot more by teachers for small things that my male counterpart could get away with.”

The dress codes throughout history have done damage to the perception of women. It’s up to the new generation of students to dismantle these misogynistic views and stop judging others based on what they wear.

*Some names were changed to protect their identity, including the names Maria Caldron and Jose Chavez.