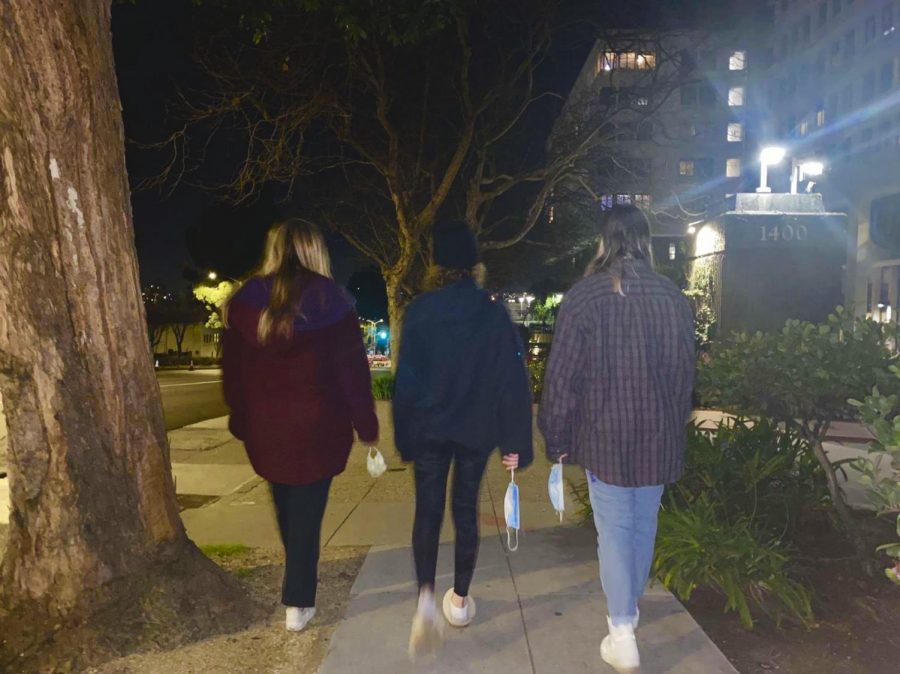 In the first week of June 2020, Alex, a 16-year-old student at San Rafael High School, was sitting in his hotel room playing Animal Crossing on his Nintendo Switch. The hotel was set aside for those in Marin County infected by Covid (Covid-19). After going to a party without a mask on, he had experienced flu-like symptoms and tested positive for Covid.

Alex was forced to stay at the hotel for two weeks until he was not infected anymore. Food was brought to the door at mealtimes and guests like Alex stayed in their rooms except for breaks to the small, grassy courtyard in the middle of the hotel. What had started as a fun get together with friends had turned into days of isolation.

“Some teenagers think they won’t get Covid,” says Alex. “But I didn’t wear my mask earlier in the pandemic when it first started, and I ended up getting it.”

For many teenagers, the threat of Covid still hasn’t hit home, even ten months after the start of the pandemic and seven months after mask mandates in California. While some have stayed in lockdown and followed the mask mandates, others have ignored safety precautions and refused to wear masks. This disparity amongst teens is causing concerns about returning to in-person schooling as we face the second wave of cases in Marin County and elsewhere in the United States.

Covid is an airborne virus, meaning it can be transmitted through respiratory particles when people breathe and talk. Masks reduce the number of particles released into the air. However, they only work when everyone wears them, including people who are asymptomatic or presymptomatic. “Not feeling sick” is no reason to go maskless.

Despite the mask mandate in California since June 18, some teenagers are not willing to wear masks when hanging out. They continue to go to parties that have friends – and friends of friends – attending without masks.

“Most teens care more about losing the best years of their lives with their friends over getting a virus,” said Will, a sophomore at SRHS. “Not the best mindset, but it is what it is.”

A senior added, “I’d rather get ‘rona and have fun.”

This attitude may stem from CDC research showing that if children and teenagers get Covid, they have mild symptoms that are rarely fatal. In Marin County, 37% of the covid cases are among 10 to 34-year-olds, who make up 29% of the population. However, 0-34 years old account for less than 1% of Covid deaths.

Regardless, children and teens can still spread the virus to high-risk people in their lives, such as the elderly and other children and teens with health issues. Even an otherwise healthy teenager may have a bad reaction to Covid and end up in the hospital on a ventilator.

Another reason for this attitude may be a general lack of information on how the virus, masks, and testing works.

“Masks don’t stop you from getting the virus. They just slow it down a little,” said Declan, a 14-year-old from Florida who was visiting his mother in California for winter break. While Florida does not require mask-wearing, their governor says that people will wear masks without being forced to.

Declan continues, “I’m not sacrificing myself to save someone else. I know I’m not going to get Covid, and I don’t care about anyone else.”

Some teenagers think that there is a connection between socio-economic status and mask-wearing.

“It should be the responsibility of families to keep their kids in check, but clearly that’s not happening, especially with richer, white friend groups,” said James, a student at SRHS. “There needs to be way more education from the school and district about Covid safety protocols.”

Although parents and teachers can educate teenagers, the choice to wear a mask is ultimately the teenager’s when they are alone with friends.

A student survey at San Rafael High School showed that most had been maskless around their families and close friends, but wore masks around everyone else. Almost everyone wore their masks at restaurants and in public places. And while 50.5% of students knew someone who had gotten Covid, only 37% of people knew someone at high risk.

An excerpt from the SRHS student survey:

Teenagers’ choices to wear masks through quarantine have also been shown through social media. Over the holidays, Snapchat stories and Instagram feeds have been riddled with posts displaying people at parties with or without masks, especially on New Year’s Eve and Day.

Out of the teens that posted pictures with their friends, although plenty were wearing masks, many others were not while in close contact. The CDC now defines close contact as “someone who was within 6 feet of an infected person for a cumulative total of 15 minutes or more over a 24-hour period,” making all people who attended a gathering potentially exposed, regardless of a mask.

With teenagers being more susceptible to peer pressure, consistent social media postings without masks normalize the idea that mask-wearing is not important, and even that it is groovy to not wear a mask.

Teen influencers, who make money on social media platforms, are still colabing as though they are in pre-pandemic times. Influencers have made countless videos of them together with other creators from outside their household.

Tiktok stars, many of whom live in California, have been posting collaborative content since early July, two months after the statewide mask mandate. Jake Paul found himself in controversy after throwing a party and posting to social media. This was long before local teenagers started posting themselves at house parties and large group gatherings.

So, thinking that it is okay to ignore mask mandates may not have started with groups of local teenagers, but rather with social media stars normalizing ignoring mask mandates. However, this does not change the perspective of teens who disagree with their peers’ posts. 57.7% of students at SRHS felt anger or annoyance towards students who don’t wear masks on social media.

“I feel like they are irresponsible and immature,” mentioned Joshua, a junior.

The amount of contact between students seems to be at an all-time high, despite restrictions on the Bay Area to limit travel and slow the spread before ICU beds run out. Whether or not more students than usual were breaking these restrictions, Marin County ICU beds were at maximum capacity on December 28th, the worst they have been so far. 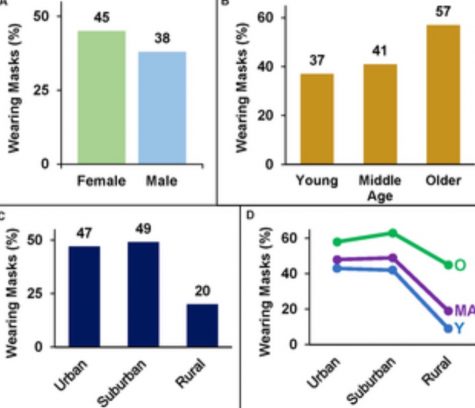 The lack of ICU beds in Marin County did not seem to stop the New Years’ parties.

Some colleges sent students back home for online learning for the whole holiday season to prevent this from occurring, but in most cases, it didn’t work. College students gathered for parties before they went back to school again, taking any germs they might have picked up with them back to their schools. Many high school seniors and college freshmen were seen gathering, mixing dozens of households and universities all around the US.

Snapchat location sharing, Snapmaps, is an easy way to see peers gathering, with groups of bitmojis clumped together at one location. Snapchat stories confirm that most of these parties are happening without masks, potentially exposing everyone there to the virus.

“It’s sad and frustrating because people are dying and it isn’t asking much to just put on a mask,” said a response to the survey at SRHS. “Part of the reason why this has been dragged out for so long in America is because people are being ignorant and aren’t making an effort to follow any of the guidelines.”

Even though Marin County is at max capacity for Covid patients, many students talk about returning to in-person school soon. With a recent school-wide survey administered by San Rafael High School, 44.5% of students did not want to go back to in-person learning, 37.5% did want to go back, and 18% are yet to respond.

There is some controversy about whether it would be truly safe to return based on tendencies to break social distance rules. People have valid concerns with students continuing to gather while in school because of past experiences with sports cohorts.

“It [a photo posted on Instagram] was a group of about 20 boys and girls in my grade… but I knew in the back of my mind that they were on sports teams at SR, and putting many other people at risk. I know that these kids weren’t doing the right thing,” an anonymous SRHS student said. Since no one reported the students, they continued to play.

Despite wanting to return to a normal school, some students are still breaking the mask mandates and social-distancing rules. Peers that see these students on social media have found hypocrisy in what they are posting.

“It’s really ridiculous how they say ‘I wanna go back to school. I hate Covid,’ meanwhile, they hang out with random people without masks all the time inside,” Katie Arnold, a senior at SR said.

“And when you try to call them out on it they get defensive. Like ‘It was only my friend group.’ No, Bethany, we saw your Snapchat story with you and 30 other people drinking and partying, shut […] up.”

If students were to go back to school there would need to be a change in how seriously people take masks.

Marlena High, a San Domenico student, is forced to take quarantine seriously to attend in-person school. San Domenico has the option for both in-person learning and joining zooms inside the classroom. This way students attend school and not infect others if they were to catch Covid or possibly be exposed.

San Domenico students are required to have a covid test every two weeks and have masks worn properly at all times, except for students eating and drinking. If someone breaks California guidelines they may not return to school until a few days have passed and they show a negative test result. During these days, they attend class over zoom alongside all the students who opted out of in-person learning.

Marlena said she wears her mask anytime she goes out, to the store, or at school. “I guess I’ll take it off if I am eating at lunch or we go out to eat at a restaurant with outdoor dining, but that’s all outside and social-distanced.”

Now that school is back in-person, she has to not only be concerned for herself and her four-person household but also all her classmates. Students who don’t have that mutual respect for everyone’s safety will not be able to come to school.

This setup is something that San Rafael High School could include in plans for returning to in-person learning. With around half of students currently wanting to go back, it is mainly a matter of whether it can be done safely or not.

SRHS has almost double the number of students than San Dominico, with a 22:1 student to teacher ratio compared to San Dominico’s 10:1, making it much easier for San Dominico to stay distanced and enforce safety protocols inside the classroom. Adding to the risk of returning to in-person learning is the fact that many households of SRHS students have over four members, with multiple generations living there.

Even with working vaccines becoming available to certain groups, mask-wearing is still essential for everyone’s safety until everyone has been vaccinated. This is especially true for low-risk teenagers and children, who will likely be the last vaccinated.

After his isolation and quarantine in the hotel, Alex has started wearing masks to gatherings with others and asking his friends to do the same. He hopes to promote mask-wearing and keep others that he is in contact with safe. “I just feel like we should listen to the protocols.”

*If a name is first name only, it is a pseudonym to respect the personal wishes of those quoted.