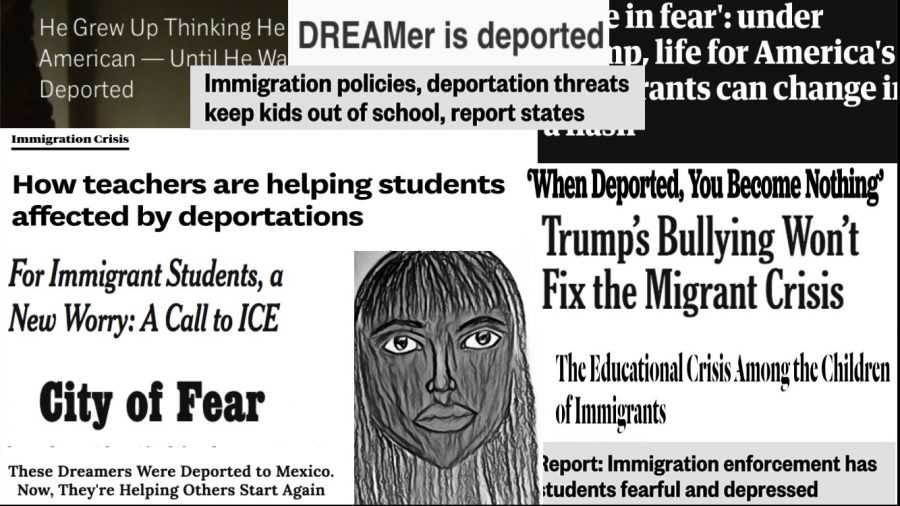 The Undocumented Students of San Rafael: Family, Fear, and Hope

Rosa smoothed out her two wrinkled dollar bills, the cost of a ride from Canal to the San Rafael Transit Center, as she made her way out the door to the bus stop. She stopped halfway locking her door when she received a call from Nina, her comadre.

A too familiar phrase came out of her phone speaker, “La Migra está en la calle Novato.” Immigration was on Novato Street.

This warning was followed by a ride offer.

Rosa closed her door, a door that had been knocked by immigrant officials twice before, while she waited for her comadre to take her to work.

Like Rosa, all the working immigrants crowded in the low-income apartments of Canal waited for the “all clear” signal from their friends and family living on Novato Street.

That same Thursday morning, Mayor Gary Phillips emphasized in an interview that the city is working on lessening the fear of deportation in immigrant communities and that “the San Rafael Police department does not cooperate with ICE officials when conducting arrests.”

“Immigration policies are frequently highlighted in the news, but less attention is paid to the context of immigration and the trauma faced by many immigrant families, both in their countries of origin and following their arrival to the U.S.,” wrote Elizabeth Horevitz and Caren Schmidt in an April 2019 Marin Independent Journal editorial.

Lola said goodbye to Guatemala a month before she turned six. Her newly arrived parents greeted her with sobs and a new pair of Converse.

Immediately, she began school at Bahia Vista Elementary, a school made up almost entirely of Latinx students. This deceptively welcoming community made little attempt to get to know Lola as she knew very little English. As first graders practiced for their California English Language Development Test (CELDT Test), speaking Spanish was no longer socially accepted by the five-year-olds that now understood the English language.

It took months for Lola to be able to form complete sentences and years for her to completely lose her accent while speaking English.

Alejandra came to the United States sipping on a bottle of sleeping medicine and accompanied by two well-paid coyotes. She was driven across the US-Mexican border to Los Angeles asleep.

Her older age and her school’s lack of English learning programs made it almost impossible for her to get anything higher than a C in her middle school classes.

Lola’s and Alejandra’s difficulties speaking English immediately made them stand out as foreign amongst their documented peers. They looked like everyone else at their school but no student seemed to want to approach them after they introduced themselves with me llamo on the first day of school.

Unlike them, Ata Becke, a Turkish immigrant, found that his pale skin and blue eyes allowed him to blend in with the other white children on the Laurell Dell Elementary School basketball court. Still, his pronunciation of the word “the” made him stand out in the classroom. Ata acknowledged, “without understanding English, it’s as if you are deaf.”

He and his family left Istanbul, Turkey before he knew how to tie his shoelaces, unaware that he would never return.

As immigrant children, their priority as they integrated into a new environment was to learn the English language. As soon as they were recognized as fluent English speakers, school became less difficult, but the fear of possible deportation resulted in unwritten laws these immigrant students learned to follow every day.

A better-safe-than-sorry mentality was quickly implemented by their parents, as soon as they arrived in the U.S. Stories of student deportations on Univision incentivized acceptable and promising actions.

Lola was given a lesson on the risks of driving as an immigrant, as students practiced for their driver’s tests. “Driving, especially without a license is an easy way for you to get a ticket and have your name in the system,” warned her father.

They learned not to draw attention to themselves, especially not negative. Creative comebacks and innocent insults never left the mouths of these children. The fewer people knew you were undocumented, the better off you were.

“I’m not ashamed of being an immigrant but I don’t advertise it,” explained Lola.

Lola’s dream of recreating aesthetically pleasing pictures from Instagram in different parts of the world is ironically restricted by the fact that she is undocumented. She wants to be able to leave the U.S to explore but the fear of not being able to reenter keeps her on edge. She understands the risks of traveling, especially out of the country, as she reads the posters of trips to Asia and Europe that decorate the halls of SRHS.

It’s becoming more difficult and risky for undocumented families to travel in-state so traveling out of the country is not even something they think about.

“It’s sad when your documented brother can visit his grandparents in Guatemala but you can’t,” explained Lola. The disconnect from Lola’s homeland made it so that she did not feel a part of either country. She left before she could truly say Guatemala was her home and arrived in the U.S where the lack of opportunities constantly reminded her this was not her idea of a home either.

The goals of children of immigrants are influenced by the sacrifices their parents made when they decided coming to the U.S was the only guarantee of a bright future. Immigrant children not only try to satisfy their parent’s goals but also try meeting society’s standards of “success.”

“I wasn’t aware that I had left my country, so I didn’t have any fear. Now that I’m older I realize that there are boundaries that I need to stay within,” said Lola.

In a 2018 poll conducted by the Pew Research Center on how likely the Latinx population believes in the American Dream, it was concluded that achieving such a goal “involves hard work, financial security, career success and confidence that each new generation will be better off than the one before it.”

“A college education was my ticket out,” explained Ata. Like most, Ata valued the decision his parents made but acknowledged that his family’s lifestyle did not fulfill the American dream as anticipated. His parents did not expect to rely on food pantries to fill the cupboards of their rented apartment.

Taking extra honors and AP classes became a trend amongst immigrant children who had tamed the English language.

“Some people don’t understand what it means to get an A in English when a year before I only spoke Spanish,” Alejandra pointed at her bilingual friend sitting across the room. “For me, it’s a big deal.”

Still, these accomplishments were discredited by some. “When I got into the University of Redlands, I was told [by a white classmate] it was so that the school could endorse its diversity,” explained Ata.

In a 2019 article by The Quad entitled “5 Things Undocumented Students Should Know Before Attending College in the U.S.”, David A. Tomar writes, “Every year, 65,000 undocumented immigrants graduate from high school in the United States.”

However, according to the article, fewer than 10% continue to college, and many less actually earn a degree.

Immigrant students that arrived in the U.S. as older teenagers, still persevere. Vy flew to the U.S. with a temporary visa. The temporary part was emphasized when she received it. After a year of working and making more money then they did in Vietnam, Vy’s family established themselves in a little apartment in Canal. Staying, guaranteed her and her family a better, more economically stable life.

Self-motivation to not become a statistic becomes the driving force amongst undocumented immigrants who worked to make their families work worth it.

“When Mexico sends its people, they’re not sending their best,” President Donald Trump said on June 2015 during one of his first press conferences as a presidential candidate. “They’re bringing drugs. They’re bringing crime. They’re rapists. And some, I assume, are good people.”

This rhetoric has helped shaped the nations views on undocumented immigrants. Rarely are immigrants labeled as business owners, first-generation college students, parents, or successful. These ideologies were more recently reinforced by the caravan hysteria, the title given to the current migration of Latin Americans to the U.S.-Mexican border.

“Undocumented immigrants live their day-to-day lives, subconsciously making plans for their kids in case they get deported. They may seem calm but in their head, they have at least two people in mind with who they could leave their children with,” said Lola.

Headlines such as “Marin man arrested in ICE bust while dropping off child at school” appear in the news columns of local newspapers.

According to “Marin County Immigrant Families Are Planning for the Worst,” a 2017 CBS San Francisco article, “Canal Alliance is holding family preparedness plan workshops for parents fearing deportation.” Canal Alliance is a non-profit organization that serves the immigrant communities of Marin. It offers legal and social services as well as educational programs to low-income immigrants. At this center, parents can get help in making child custody arrangements and organizing their documents in case deportation were to occur.

In “What Are We So Afraid of When it Comes to Immigration,” a late 2018 article published in The Catalyst, Jeff Kim states, “[Undocumented immigrants] live in constant fear of not knowing what’s going to happen to them. They also live in fear of having no voice or power to change what affects them the most.”

Children will continue to immigrate from all over the world into the U.S and will adapt to its culture. They will understand that a dollar is more than one peso. They will learn that the basketball term “sit on the ball” does not mean to physically sit on the ball. Their phones will always have the ringer on.

Once again, Rosa stepped outside, crumpled her two dollar bills back into her pocket, and examined the neighborhood as her comadre drove the long way to the freeway to avoid the street that now had a family without a father.