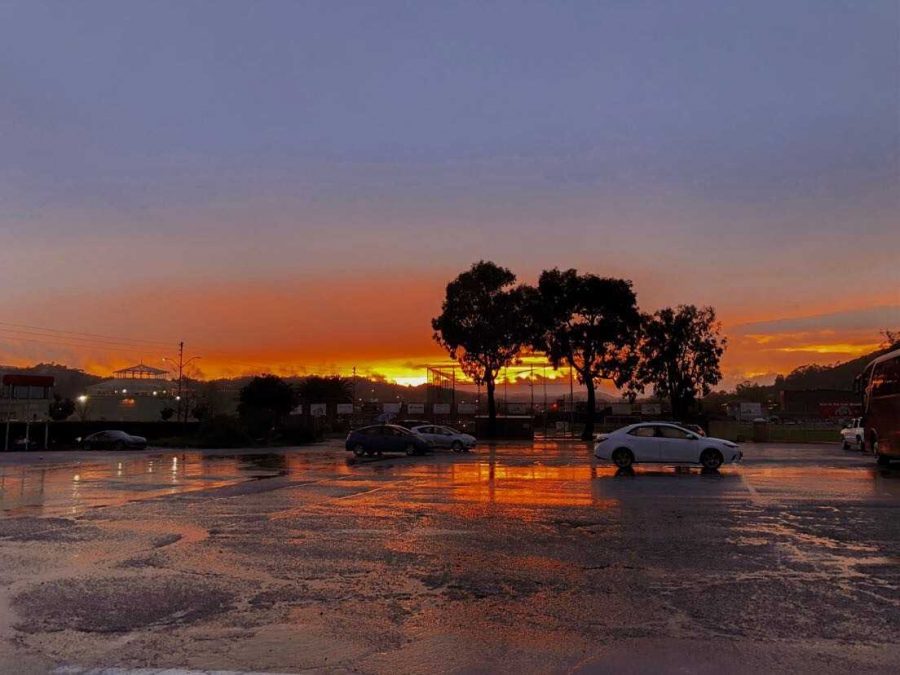 The Legend of “The Lots”

As the sun was setting on a warm Friday night, a San Rafael High School student, who’d like to be addressed as Princepessa Mendoza, had just pulled up to the SRHS parking lot with no plans in particular. He parked his SUV with all the windows down and blasted some music as he gazed into the bright orange setting sun.

As he enjoyed his blissful afternoon, some fellow students heard the music from across the lots and built up the courage to walk over and join him. They spent the rest of the afternoon jamming out and building new friendships.

This environment that students have created has allowed this group of students and many others, who had never talked before, to create a new friendship and create a new memory. It’s a pretty great one, too, according to Princepessa.

The San Rafael High School parking lots have gained the nickname, “Lots.” The Lots is a place where current students and other young adults from around the county meet up or hang out, typically on weekends.

Mendoza’s experience seems to be similar with many students and young adults around Marin county who slide through The Lots on a random weekend.

“It’s a place to meet new people,” explained another SRHS senior, Alex May.

Dave Pedroli, the SRCS Head of Facilities, is an SRHS class of 1980 alumni. The 80s were more or less the end of the era of cruising and culture portrayed in the film American Graffiti. Cruising was the popular event for students, and it would happen every weekend. The Lots was the place to be if you wanted to be a part of the very existent car culture at the time.

Recently retired staff member Nancy Segale took us all the way back to the 1970s, which was when she was a senior at SRHS. She also mentioned the car culture around at the time. The Lots served as a meeting place back then when the cruising days still existed.

Another class of 1980 alumni and SRHS staff member, Ms. Pipkin, said that her opinion is split on whether or not The Lots is a healthy aspect of school culture. Pipkin expressed that she doesn’t think it’s all that safe, but that she’d rather have students hang out somewhere they know rather than somewhere they don’t.

Pipkin said, “I think that if you’re going to be in any place, just look after each other, respect yourselves, and just, you know, respect the property.”

When asked the same question, Principal Glenn Dennis responded, “Absolutely. I think there’s positives in having students be able to hang out and socialize, at the same time it’s up to the students to manage it.”

From our interview with Mr. Dennis, he is most definitely on board with students socializing safely but stresses that they have a responsibility to make sure it doesn’t go overboard. This could mean making sure students don’t leave their trash or participate in unsafe behavior.

A SRHS class of 2017 alumni, Alexia Rodriguez, explained how the school and police used to be more strict about The Lots. Night-time custodians would see the groups of cars and call the police. She mentioned that once students started getting in trouble or approached by police, they decided on a change of location.

Rodriguez said, “Becasue of this [crackdown], the result was us hanging out in a bunch of dumb, unsafe places. It’s good you guys have a decently lit space in a safe area.”

Many of the adults interviewed had the same opinion on the The Lots. This wasn’t the response we expected, but we absolutely agree. This has been a safe space for students to meet and hang out. In our interviews or through our field work, we did not hear of or witness any major unsafe behavior.

When “The Lots” started is a hard question to answer. From all the way back to the cruising days to today, The Lots have always been used by students as a place to meet up. Back in 2015, freshmen heard about the incredible times the seniors would have at The Lots. They waited for a turn to enjoy it too.

Looking back at our experience as freshmen and our interviews with underclassmen, we noticed that many underclassmen don’t visit The Lots as much as upperclassmen do. A sophomore going by the name of Jessica expressed that The Lots are definitely a vital part to SRHS culture, just not for every grade. The Lots are more convenient for students who have cars and a licens

e to drive, and Jessica explained that her friends and herself don’t have licenses, making it difficult to participate.

A 2015 SRHS alumni, who’d like to go by the name of Espaider Men, also expressed the same point. “We started hanging out at the lots because the upperclassmen would do the same, so we sort of followed that tradition once we became seniors.”

The Lots also have replaced previous hangout spots. For example, plenty of students  hang out at the parking lot for lunch rather than the senior or junior tree. Now that the former tradition of having a senior and junior tree is gone, the upperclassmen use The Lots instead.

“I remember the last time we had beach chairs and we put them out during lunch. We sat there and ate while listening to music,” said Jimmy Rodas, thinking back to a certain day he spent at The Lots.

Another special aspect of The Lots was the fact that many students from other schools meet up there as well. A San Marin High School class of 2016 alumni who would like to remain anonymous shared her experiences with The Lots. She summarized that it was just the place to be, and that you would always see some students from every school at The Lots over the weekends.

We noticed in our fieldwork that the majority of other kids coming to The Lots from other schools were from Terra Linda High, Madrone, and Novato High.

“The lots is important because it’s a good environment to socialize during and after school. It’s a valuable place,” said another senior going by Federico.

Being a part of Student Voice, (a group that talks about the issues and concerns of SRHS) one dilemma always addressed is the fact that the students tend to stay in their cliques and don’t venture out of them. On a cold Friday night in January while conducting field work at The Lots, we witnessed something we had never seen before.

On this particular night we saw underclassmen, upperclassmen, and students of all backgrounds together. We saw barriers broken and the stereotypes people had against one another be erased. We all danced to the same music, engaged in conversation, and in the end made sure everyone got home safely.

With the school year coming to an end, we seniors are sad to say goodbye to what, for most, was another place to call home. Even worse was finding out the news that there is a possibility of The Lots being gated off for the summer.

After being informed of such news, Mendoza said, “Nah, you can’t do that. I mean anyways, gates or not, we’ll just park at Pelo and just hop the fence or something. It won’t stop the culture of The Lots, it won’t stop because of some gates they wanna put up.”

When we began to report and think about our story we were a bit nervous on what overall message we’d be expressing. Many thought we were out to “snitch out” The Lots. After we finished off our investigation we realized that there was really nothing to snitch on. While it is true that some kids do consume alcohol and smoke marijuana at The Lots, that isn’t what we want to capture in our report.

During Espaider Men’s interview, he reflected on what it’s like now that he is an alumni. He began to explain the new responsibilities you have as an adult and the fact that you don’t have the same time to be doing things like participating in random dodgeball games at a parking lot.

“Once you’re older, these kinds of things get limited, way limited,,” texted Men.

There are two types of seniors at SRHS. Some roll their eyes when someone mentions that they won’t have the slightest recognition of their high school experience, while others pray that what’s being said is 100% bound to happen. We, on the other hand hope that it’s only a half-truth. Our time here at SR is filled with memories that we’ll forever cherish. Even though it was one of the roughest four years for some students, the time spent at The Lots is always something we can remember and laugh about later.

With the school year coming to an end, we asked students if they plan on returning to The Lots after high school.

y Lots now and then move on after it. There will be plenty more places that can be considered your new Lots so just leave it behind.”

Another senior, who prefers to be addressed as Sammy Lund, felt very similar. “I don’t think so, I’m getting older, moving on in life. I’ll always remember all the wonderful memories but [I] gotta leave that place in the past.”

Saying goodbye to The Lots may not seem like a big deal but it’s part of a very important chapter in our youth that we’ll be closing off. Just like when we left Davidson Middle School and the wild memories of snake path, or even playing around in the marsh at Glenwood Elementary.

It’s not exactly about the location. Instead, it’s the memories, friends, and full sends (slang for going all out) that were made. These spots all had an impact on our childhood and now we pass The Lots off to the juniors with the simple request that you pick up after yourselves.