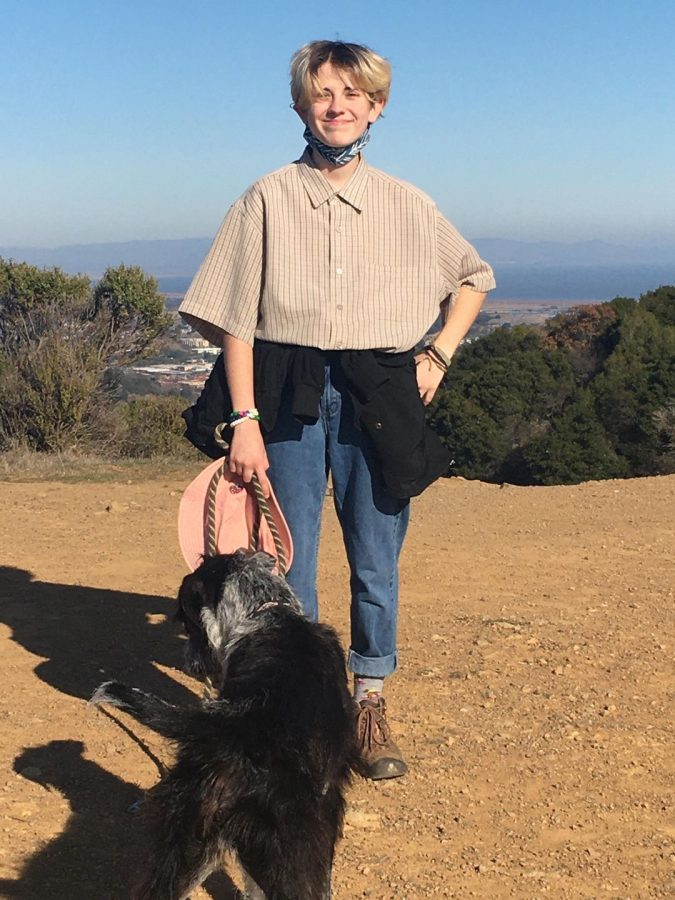 Getting up in the morning and looking into the mirror with heavy dysphoria, they do not know which kind of hate will be thrown their way today. Will their classmates verbally harass them? Will people make fun of their new name? Will they be called the ‘f slur’? Many people struggle with choosing an outfit to wear or deciding which hair style best suits them, but not everyone struggles with their gender identity.

Life’s obstacles come in various shapes and forms, some more difficult than others. As a cisgender and straight woman, I have not endured the journey of identity seeking that many have; and that so many others are currently on. At the age of 15, Rai Jobe is blossoming into their own individual, with hardships beating down upon them relentlessly. Hate, misjudgement and ignorance have become part of their everyday life, solely due to their personal, private, and rightful identity.

“I identify as nonbinary and I identify as queer,” stated Jobe. For most people outside of the LGBTQ+ community, nonbinary is not a familiar term. By definition, someone who is nonbinary does not identify as either male or female; instead, they are ‘gender fluid.’ Most who identify as nonbinary use the pronouns they/them. It is truly rare for people to ask what someone’s pronouns are or what their gender identity may be since any LGBTQ+ related issues have not been considered as ‘regular or normal’ within society. The default is always he or she, never “what are your pronouns?” Rai described how this actually works for their benefit because if someone is confused about which gender they are when they meet for the first time, they feel accomplished. “I mean that’s basically the whole point of my existence – to make people not know if I am a boy or a girl. When people get confused, that’s how I know I have achieved my goal,” explained Rai.

“The first person I came out to was my sister. I was in sixth grade and I just told her, ‘I think I’m gay’,” they recalled. I asked questions about their ‘coming out’ experience which revealed Rai’s thought process and family’s reactions in doing so. “The person I was most nervous about coming out to was my grandma,” said Rai, “she has a gay son, but I was worried that she wouldn’t understand what non-binary meant.” Among older generations, it is more common to be uninformed regarding LGBTQ+ topics. In an article by The Nottingham Tab, the relationship between elderly people and homophobia is examined; showing that older people were more likely to feel uncomfortable seeing gay couples rather than seeing straight couples. Since so many seniors already have an issue with gay and lesbian couples, it makes sense for nonbinaries and transgender people to feel uneasy about coming out.

Although many people openly support those who are nonconforming of gender, there are several who unfortunately feel uncomfortable with the topic. There have been homophobes and transphobes all through time, and Rai has had several encounters with these oppressors as well. “I remember in middle school there were a few girls who would yell things like ‘there are only two genders!’ towards me,” said Jobe. Rai told me how several other students at their middle school would say things that were intentionally transphobic, and how others would purposely use Rai’s previous name, Rachel, in hopes of getting a reaction from them.

“When I first came out to my sister and mother, I said I was lesbian. Obviously I was wrong, but hey, I was close,” Jobe said, laughing. Talking with Rai shows me how confusing it can be for some people to come out as who they are. Some people don’t quite know at first, others do, and some people need a long time to fully understand what their identity is. Now knowing that they are nonbinary, Rai says that they wish more people would be less afraid to ask, as long as they are not rude when doing so.

Middle school is always filled with awkwardness, drama, and bullies, and for Rai it was no different. “I remember there was a time during P.E. where a guy wouldn’t stop asking me if I was sure I was a lesbian,” remembered Jobe. “He kept listing off girls in our grade and asking if I was attracted to them or not.”

Rai is neurodivergent. Neurodivergent, by definition, is when a person’s neurological processes are abnormal or extreme. Other challenging factors in Rai’s life include ADHD and depression. “In elementary school, all of my teachers thought that I was dyslexic, but it was my ADHD that made me fidgety and caused me to move fast,” explained Jobe. Rai has been going to therapy for ADHD since the age of six.

There are not many people who have someone in their life that they can lean on, or count on for support in times of stress or need. Rai said that they are thankful for the support and comfort they receive from allies. “My therapist and my mom are my biggest support outlets and have always been accepting of me,” said Rai.

For many nonbinary people, they are usually referred to as either a girl or a boy by those who do not know their correct pronouns. When asked which gender most people assume of them, Rai responded, saying that as they have become more androgynous over the years, more people have begun to use he/him pronouns more often than before. “I don’t want to be perceived as a guy, but it’s better than being perceived as a girl because I feel more dysphoria around being perceived as a girl because that is how I was born,” said Jobe. Being nonbinary is harder for many outsiders to interpret, since so many new factors are introduced rather than just someone saying ‘I’m gay.’

Due to the fact that many non binaries wish to avoid the misgendering and assumptions made by others, pronoun pins have become a creative and effective solution in certain situations . Pronoun pins can be worn on clothing or jewelry, with a person’s preferred pronouns listed on the pin. Rai says that they think pronoun pins are a great way to steer clear of gender conjectures. “Younger people are always a lot better with remembering and asking about pronouns, too,” mentioned Jobe.

Rai’s goal at the moment is to have gender confirmation surgery. Many non binaries look into gender confirmation surgeries and many pursue them later on in life. There are several different kinds of these surgeries, including top surgery. For someone who identifies as neither male or female, creating a self image that resembles neither is ideal. Top surgery would indicate that the female chest tissue is surgically removed in order to form an appearance that best suits the individual’s identity. “The first thing I want to do as soon as I get top surgery is go to the beach. The beach would be my first stop right after the hospital,” said Rai. They explain how they cannot go to public pools, beaches, or attend anything swim related because they feel uncomfortable around certain people who do not understand why they wear a binder. Binders are a helpful option for non binaries who prefer a flat chest and androgynous appearance. “I mostly just wear ‘dad shirts’ and it’s basically my personal style  now,” said Jobe when asked about wardrobe likings.

Self expression is among the most important factors of a healthy mindset. For some, expression comes naturally and for others it is difficult to portray expression the way they wish. For Rai, their incredible artistic abilities come into play in amazing ways. Having been musically and artistically talented since early childhood, they have been able to express themselves through music, songwriting, singing, and art. “I write and cover songs and I also do a lot of vent drawings,” mentioned Jobe, “I vocalize my opinions a lot which is another great way of self expression and I listen to artists who have a lot of trans fans as well.” For many, the internet has become another form of expression and even public image that can be used as an outlet for creativity and identity. Rai says they prefer expressing themselves online, as it feels more comfortable and they can come across as more androgynous this way. With over 20,000 followers on Tik Tok, Rai has formed a beautiful online world of their own, posting song covers and short clips showing their personality for the world.

At first, pronouns can be difficult to remember for some. Rai’s older sister Ruby had a difficult time adjusting to certain aspects of Rai’s identity as well. “I can’t remember exactly when they switched to they/them pronouns, but I remember one day they just came to me and said, ‘don’t call me Rachel anymore’,” recalled Jobe. Ruby said that at the time, she didn’t understand why Rai couldn’t just be a girl or a boy, and that it was hard for her to remember pronouns in the beginning. “After a while I finally realized that they were stuck in the wrong body and that they were not meant to be ‘Rachel’,” said Jobe. For some non binaries, the dysphoria surrounding gender fluidity can take a serious toll on their mental health. In an article written by the Anxiety and Depression Association of America, the internal struggles and underlying causes that result in poor mental stability are highlighted.

Rai’s sister openly discussed with me the struggles Rai had faced in middle school with friend groups, and it became evident that support from friends was not in reach for Rai at the time. “I remember the day so clearly,” began Jobe, “they had called me on the phone after and asked me to come home as quick as I could; I could tell by their voice on the other end that they were distraught and that something bad had happened.” When Ruby came home that day, she learned that Rai was looking for emotional support from friends and had reached out in a text thread to explain that they had been feeling depressed lately. The other group chat participants had bashed Rai for this, saying that it was a lie for attention and no one would believe them. “I had never been so angry,” remembered Ruby, “I told Rai to give me their friends phone numbers so I could call then immediately.” Ruby contacted the kids and gave them a furious scolding that would ensure Rai would not be bullied again (for personal reasons this excerpt is not included).

We live in a world where people of the LGBTQ+ community are unfortunately still oppressed and discriminated against. However, with each kind gesture and ounce of respect, people can feel welcome and safe in the world that is just as much theirs as it is everyone else’s. Looking at the updated map created by Movement Advanced Project, it is evident how many LGBTQ+ adults live in America. There are more proud members of the LGBTQ+ community than most would know. Gender identity is not a trend and it is not a phase.

One Response to ““It’s Okay To Be Different”: One SRHS Student’s Gender Fluidity Story”