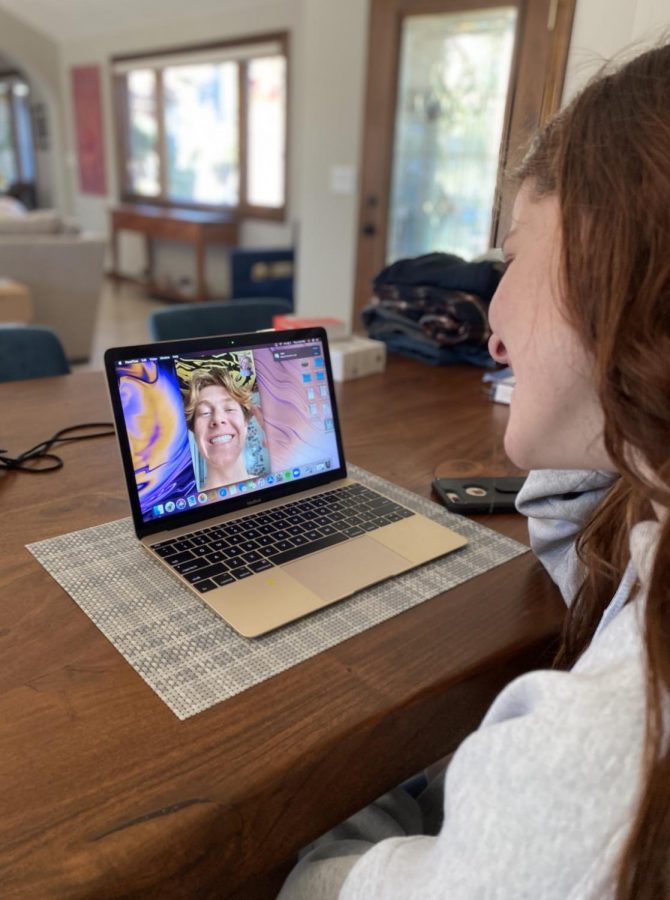 Covid, College, and Social Media: How Do Teens Date in a Pandemic?

Through their nightly Facetime call, Amelie and Jude try their best to stay united and connected. They are high school sweethearts, many may call them, who have managed to stay together from their geographically close, yet socially distant homes of Chico and San Rafael. After spending over a year together in high school, their single grade difference brought them over one hundred miles apart.

The two met early in her junior year, his senior year. Knowing this, they always kept it in the back of their minds that he was going to leave for college and they would likely have to break up. However, the outbreak of Covid-19 changed the time frame for it all.

A study from the Pew Research Center found that overall, 35% of teens aged 13-17 are in a relationship or have been in one in the past. While a little more than one-third of all teens have dated, only about 2% of marriages come from high school relationships, compared to 40 years ago when this number was about as high as 25%.

However, this statistic is small, and it has been found that high school sweethearts who get married at age 20 are much more likely to be divorced than couples who marry at 25. This is because, as written by Men’s Divorce, “the lack of experiences in life and the emotional maturity level when the relationship began and the uncertainty of what step comes next can cause so many relationships to sink.”

High school relationships are challenging due to numerous reasons, as well as the fact that teen brains are not fully developed at this age, which causes teen daters to become “tunnel visioned,” as described by San Rafael High Counselor, Avi Fernandez.

While the phrase “your whole life ending” seems far fetched, it is not too far off for some teen daters. Fernandez explained how when teens, in a bundle of hormones, find themselves in a relationship, they often lose sight of their priorities. When priorities are lost, young people might find themselves having trouble completing schoolwork, or maintaining other relationships with friends and family.

“Everyone is different, and [my friend’s] particular relationship caused her to pull away from her other friends,” said Libby Davis, a graduated San Rafael student about one of her friends in a serious relationship. She explained how once her friend got into a relationship, time without seeing each other enough made it so that they lost their friendship connection almost entirely.

Still, she assured me that despite the fact that friendships naturally change over time, “a friendship is two sided and just because one of them has a new significant other does not mean that either people should stop initiating plans to hangout.”

Similarly, Amelie described a situation that cautioned her in her own relationship. It was of a friend who had become codependent on her older boyfriend, which led to her leaving San Rafael High and continuing the rest of high school through independent online studies. In time, she too had lost contact with the entire friend group and hung out solely with him, becoming very socially anxious in the process. This experience taught Amelie how important it is to maintain relationships with friends all while having a significant other.

Having this in mind, Amelie and Jude ended up doing the opposite of disconnecting with friends. Their relationship, which was formed through mutual friends, ended up strengthening their connections with others and created a new opportunity for friends to connect and hangout.

“We started hanging out with each other’s friends, and everyone really clicked. Everyone already knew each other, but instead of just being school acquaintances we became actual friends,” Amelie said.

Judy Scherwin, a mental health counselor from San Rafael High added that “getting into a romantic relationship won’t affect [already strong and valued relationships with friends and family]. If anything [it] will be adding to your support system,” she explained.

While teens and relationships are a complicated subject, Scherwin emphasized how “relationships in general are important when it comes to our mental health and overall well being.” She stated that positive relationships can result in “augmented happiness and satisfiction in life, positive mental health, and reduced risk of suicide and death.”

The underdeveloped teen brain is also a large determinant of what makes a healthy adolescent relationship. Because teen brains are not fully matured and lack the part of the brain responsible for responding to situations with good judgement and awareness of long-term consequences, they might not be able to fully grasp what they are doing to themselves and others.

A study from Brigham Young University suggested that “many adolescents do not have the cognitive skills and resources to competently deal with the challenging aspects of relationships,” which is concerning when combined with the other factors of stress that high school students deal with.

Even students who are not in a relationship may feel the pressures of the high school dating experience, especially when social media presents a misleading reality to it all.

“I feel like a lot of people will see relationships on social media, T.V. shows and movies, or their friends posting and wish that they had the same thing,” said a LGBTQ+ member of San Rafael High, who wished to stay anonymous. “It’s a lot more difficult for LGBTQ+ students too, because the dating pool for gay people is a lot smaller.”

This student described how she has “felt lonely when hanging out with [her] friend group when they’ve all had someone there, and [she’s] been alone.” Earlier in high school, it was even more difficult for her, as she was “ashamed and kind of embarrassed of [her] sexuality, which took away a lot of self confidence from [her], and made it hard to think that [she] was deserving of something or someone,” while others were participating in teen dating life.

As reported by the Pew Research Center, 63% of teen daters have used social media to express support towards another’s relationship. This creates a whole system of teens supporting and idolizing what seems to be “perfect relationships” online. Social media creates a warped reality in which people put out their best foot, depicting a version of themselves or their relationship which seems perfect to others, when in reality, it’s not.

Similarly, a small study from the Mayo Clinic found that “adolescents who used social media passively, such as by just viewing others’ photos, reported declines in life satisfaction. Those who used social media to interact with others or post their own content didn’t experience these declines.” This proves how social media, despite its ability to include everyone, can make so many feel left out as they watch other’s experiences behind a screen.

Additionally, after the outbreak of Covid-19, the teen dating environment has completely shifted. Instead of being able to socialize at school, teens are separated from their normal social environment and placed into an all-digital environment.

The American Academy of Pediatrics and Sharp Health News suggests that during these times of social distancing, teens try staying connected virtually through virtual dinners, watch parties, and having time for private phone/video calls. Despite these alternatives though, many teens still crave physical contact and connections with their peers.

Amelie recalled in the early months of the shutdown how she was unable to see any of her friends or her boyfriend for months. “My parents were really strict about me staying home, and didn’t let me see anyone. It was a hard time for me, and during it I got really down on everything.”

During the Covid lockdown, social media has “been one of the ways students stay in contact with peers and family,” Scherwin explained. In that sense, it is a positive thing, but Scherwin warned that it can easily turn into a toxic environment when “students and adults as well, get caught up in the unique aspect of people posting ‘insta-worthy’ images, displaying a staged view of both life and healthy relationship goals.”

In the case of Amelie and Jude, college was postponed many months. This allowed them to stay together for a longer period of time, but in an unpredictable environment where both of their futures were unknown, making life very stressful for the both of them.

Counselor Scherwin emphasized that “feelings of stress and frustration are completely normal” during these times, and that she, as well as Fernandez hope to “break down the stigma of asking for help and admitting that you need support,” “and that if you need help, that is okay. You deserve it.”