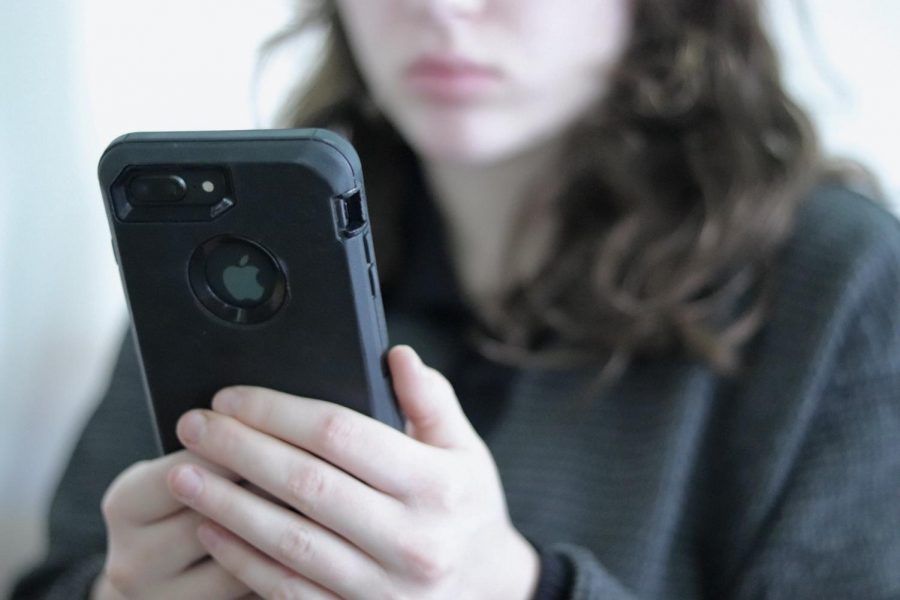 Buzz. Savannah Pritchett, a senior at Redwood High School looks down at her phone. Someone commented on her recent Instagram post. She pulls her eyes away from the screen back onto her science homework. Buzz buzz. Another comment, and now a notification from Snapchat. She tries one more time to shut off her brain to the possible social interaction that is just inches away from her fingertips, but her phone lights up once again with the buzz sound she’s grown to hate, but just can’t get enough of.

Pritchett opens up Instagram and quickly goes to her post. She smiles at the comments of her friends saying she looks beautiful and has a “perfect body,” but quickly notices something odd. Her post only has a hundred likes, but she posted it an hour ago. That’s very low compared to her usual posts. Her smile fades and she goes back to her feed. Pritchett sees girls in post after post getting more comments and likes than her. They are prettier, skinnier, and their posts are better than hers. She goes back to her post and deletes it in an upset fluster before lying on her side and continuing to scroll through her feed as a tear trickles down her cheek.

“There’s always going to be judgement on social media, even if no one is directly judging you, just because that comparison and ability to comment or like will always be there,” says Pritchett. Social media is a fairly recent form of entertainment and has quickly exploded in popularity. Social media was invented in 1997, with the first notable site called Six Degrees, which allowed users to create a profile and make friends. Now, social media companies have perfected algorithms and features that are designed to be addictive.

These sneaky features on apps have proven to be lucrative, as ninety percent of teens in the US have used social media, and seventy-five percent of teens have at least one active profile on social media. A few of the seven most popular social media platforms of 2020 are Instagram, Tiktok, and Youtube. During the worldwide pandemic with shutdowns across every state, teen social media use has increased significantly. Although these apps are marketed as fun, creative, and harmless, the SRHS community tells a different story of how social media can seriously affect the mental health of students.

Zoe Machado, SRHS’s mental health counselor, says, “Anything that poses as a stressor to someone’s environment can affect someone negatively. Some people can get sucked into spending a lot of time absorbing potentially negative interactions on social media.”

Social media allows people to come into contact with just about anyone and profiles can be anonymous or use fake names. Unfortunately, this leaves space for sketchy people and insecure teens to harass peers without facing real life consequences. This issue is more prominent than it may seem, with fifty-nine percent of US teens admitting to being harassed or bullied online, and forty-two percent of US teens experiencing cyberbullying on Instagram.

An SRHS senior who wishes to remain anonymous shared, “A few months ago I posted about BLM on Instagram and received 5 death threats and even more people shaming my appearance. It made me extremely self conscious and now I am very cautious about what I post.”

“I have seen horrible comments on other people’s posts, even when the content they are posting is harmless,” says former student Mia Villenueva about her experience with cyberbullying.

Although many people suggest that people should just delete all social media or simply “close their computer screen” when someone is being bullied online, the issue is rather complex. Just like any other victim of bullying, cyberbullied kids experience anxiety, fear, depression, and low self-esteem. However, it is important to realize that generation z has grown up with smartphones and social media, so cutting them off from that form of communication can feel like they are cut off from the rest of the world. Many fashion trends, memes, and slang are created on social media then spill over into real life. If someone cuts themselves off from social media, it can lead to feelings of isolation and not fitting in.

Regarding cyberbullying, Machado advises, “The thing with cyberbullying that makes it unique is that you can carry it with you wherever you are on your device. That is why it is important to be conscious of the type of content you consume, and to take breaks when you need.”

The type of content that one consumes can also have a big impact on their mental health. “Thinspiration” and “Fitspiration” have been around for a long time on social media, along with “thinspo,” which is defined by pictures or quotes that use unhealthy habits and “pro-ana” (pro-anorexia) to promote extreme thinness. Thinspo and pro-ana content most often appears on apps such as Instagram, Youtube, and Tiktok, and it is often disguised as wholesome and attention grabbing content, such as “What I Eat in a Day”, and “How I lost 10 pounds in 3 Days.” Young teens who are learning about their bodies and societal standards often watch this content and spiral from it, with many developing body dysmorphia, and eating disorders.

An SRHS sophomore who wishes to remain anonymous has been heavily affected by this content, saying, “In eighth grade on an app where you could anonymously message people, I got multiple texts saying I was fat, needed to eat less, and needed to work out. I had already been insecure about my body for a long time and had been following thinspo accounts on Instagram for motivation. It only hurt my mentality more, and I am just now getting over an eating disorder years later.”

“All of these trends on TikTok (like the side profile, back profile and showing your teeth trends) kind of make me have more insecurities than I already had. It also puts pressure on me to wear certain things that I can’t afford,” says Lili Peixotto regarding the toxic trends that have become popular on TikTok. The only purpose of these trends is to praise people who have certain features such as a small waist, small nose, big lips, and straight teeth, to put down those who don’t.

Savannah Pritchett does fashion photo shoots through a modeling agency. Nowadays, models have to keep up an online persona through social media, which can contribute to these expectations for young girls. “For agencies, the likes and followers matter, and you’re supposed to have a minimum of 5 thousand followers on instagram to even be considered relevant,” says Pritchett.

However, just maintaining a good social media platform is still not enough. Many girls in the modeling industry are under a lot of pressure to post the perfect photos just so they can keep their job. Pritchett explains, “If I post something on social media and my agency tries to book something for me, the company or business can look at my account and if they don’t like what they see, they don’t book me.” She has to constantly compare herself to other models on social media, just so she can keep up with fashion and makeup trends, and understand her competition. This is a breeding ground for self-hatred and body issues.

“If someone finds themselves comparing themselves to thinspo or images that have gone through lots of altering with photoshop, facetune, etc, there are ways to filter your content online to avoid certain hashtags that may have this content,” comments Machado. “Increasing the amount of body positive accounts you follow can also help, so you are also consuming media that is realistic and uplifting.”

Instagram is loaded with travel footage, fancy lunches, and group photos. This is the perfect recipe for FOMO, the disease of our generation. You could be lying in bed, perfectly happy with your Friday night in, log onto instagram for less than five minutes, and then suddenly feel horrible about yourself. Instagram sets a standard that you must always be doing something interesting, and it has the potential to make people feel left out when they see pictures of events they couldn’t go to or worse, they weren’t invited to.

An article by the Newport Academy Treatment Center about social comparison says, “Psychologist Leon Festinger proposed the theory of social comparison in 1954. He believed that people have an innate drive to evaluate themselves. According to social comparison theory, individuals determine their own social and personal worth based on how they measure up against others.” This is a perfect example of why teens compare themselves to others. It is just in their nature.

From cyberbullying to harmful content to getting stuck in a loop of comparing yourself to unrealistic standards, social media has proven to be a toxic environment for teens. After  all, teens are still growing up, and as platforms are marketed as safe and fun, digesting damaging content can leave a lasting scar on confidence and overall mental health.

For those feeling negatively affected by the harmful sides of social media, Machado suggests, “Take breaks from social media, do a social media cleanse, and invest more time consuming media that makes you feel good and uplifts you. And finally, seek professional help if you need some extra support with any mental health concerns. It’s okay to ask for help.”